Price of Bitcoin Continues to Plummet, Falls Below Price of Mining for Them 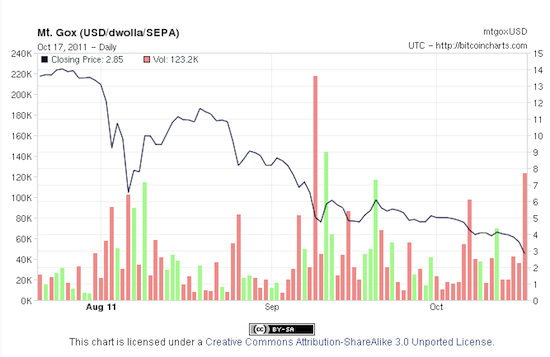 Bitcoin is a weird thing. While many would argue that currency itself is arbitrary, Bitcoin is a virtual currency backed by tangible currency. One benefit of Bitcoin is that it is pretty much untraceable, allowing people to buy nefarious items across the Internet — generally drugs. Another benefit of Bitcoin, one that some will speculate doomed the currency to fail from its inception, is that it is able to be generated for what many people would claim is free, as the only real costs involved are the electricity spent on the computing power being used to mine for said coins.

Well, those doomsayers will be happy to know that the price of Bitcoin has been falling for some time, and has now fallen further than the actual price to mine for some. The worth drops around one dollar every week or so. At least one Reddit user is speculating that one Bitcoin will be worth one USD sometime soon, effectively making Bitcoin worthless — not in that one USD is worthless, but in that one can simply use USD to pay for things instead of go through the process of obtaining Bitcoins. If you feel the need to monitor your favorite Internet currency, head on over to the numbertastic (or numberterrible, depending on your taste in quantity of numbers) Bitcoin Charts.