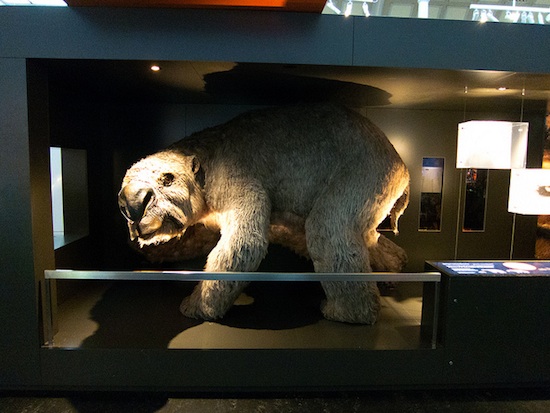 Even in its ancient days, the continent of Australia was renowned for its bizarre menagerie of marsupial mammals that beggar description. The one major difference between now and then is that nearly all marsupials at the time were considerably larger and forced to reside on the ground. That said, fossil researchers from the University of New South Wales and the University of Adelaide recently declared that the wombat-like marsupial Nimbadon lavarackorum lived among the treetops in spite of its massive weight and size.

According to the researchers who made this head-scratching discovery — after studying a veritable graveyard of the animal’s fossils within a cave back in 1993 — Nimbadon lavarackorum was about the size of a modern day human and weighed nearly as much. Looking at the ancient marsupial’s much more diminutive (and gosh darn adorable) wombat descendants of today, it goes without saying that scaling the tops of trees isn’t exactly their forté. So how did N. lavarackorum manage to climb trees and frolic among the canopy without breaking a sweat? The answer lies in the bone structure of the common koala.

Analysis of the fossils has shown that, similar to koalas, N. lavarackorum had a set of mobile elbows and shoulder joints, huge claws, and strong forelimbs that were all ideal for traversing the treetops. In a show of Olympian dexterity and strength, N. lavarackorum‘s short hind legs and death-grip feet were amazingly strong and allowed it to effortlessly hang upside down from tree branches simply because it could, or to be able to reach some tasty fruit that’s just a bit out of reach.

N. lavarackorum must have been the fitness jock of Australia’s prehistoric rainforests, because unlike other members of the giant wombat family known as diprotodontids, it was the only one capable of climbing trees whilst slinging insensitive fat jokes at its grounded and corpulent cousins.