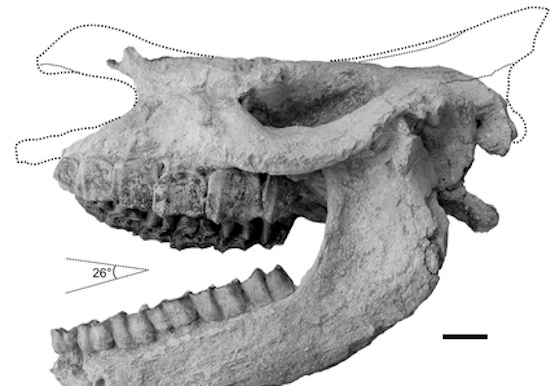 A team of European paleontologists have described s nine million-year-old rhinoceros skull in a nearly unbelievable state of preservation, thanks to the fact that it once belonged to a rhino who suffered the unlucky fate of being flash-cooked in volcanic ash. While it sounds like a pretty terrible way to go for the rhino, the immaculately preserved skull is a boon for researchers, who are getting a better look at the ancient mammal than they ever thought possible.

Bones preserved in volcanic ash are rare treasures for paleontologists, as the process of instantly cooking an animal to death tends to make quick work of the poor creature’s bones as well. Considering this rhino would have met its fate by being boiled alive in a pyroclastic flow at temperatures higher than 400 degrees celsius, it’s nothing short of a miracle that any of its body parts survived, and especially that they survived in such a pristine state. According to a study of the remains published this week in the online journal PLOS ONE:

…the body was baked under a temperature approximating 400°C, then dismembered within the pyroclastic flow, and the skull separated from body.

If you’re a fan of rhinos — and really, what’s not to like about the creatures? — you can take comfort in knowing that this one at least didn’t suffer much in its passing. The two-horned rhino, which would have been common around the Mediterranean during its lifespan, would not have been with it for the dismembering portion of its final act, so…hey, small mercies, right?