Is A Zombie Apocalypse Happening Right Under Our Noses? | The Mary Sue

Is A Zombie Apocalypse Happening Right Under Our Noses? 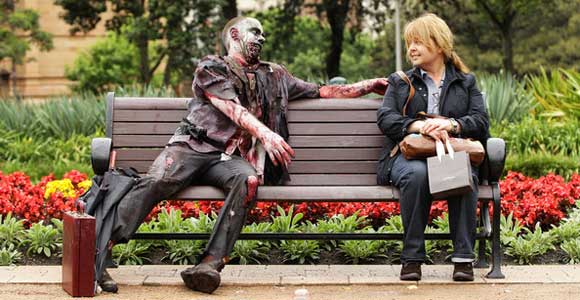 At one time or another, those of us who love zombie fiction have thought about the possibility that something like that could happen in the real world. This happens to varying degrees of course. Some of us think some type of biological event could spread as quickly as any “zombie disease” while others have a back in their closet with maps, waters, and weapons they’d need in the event of a legit zombie attack. The former may want to make friends with latter. Some weird crap has been going on in the world the last few days.

First thing’s first. Did you hear about the man who was killed in Miami, Florida this weekend? He was found naked…eating another man’s face. Sorry to have to give you that visual but this actually happened. It happened in the middle of the day on a highway off-ramp.

According to police sources, a road ranger saw a naked man chewing on another man’s face and shouted on his loud speaker for him to back away,” according to the Miami Herald. “The officer, who has not been identified, approached and, seeing what was happening, also ordered the naked man to back away. When he continued the assault, the officer shot him, police sources said. The attacker failed to stop after being shot, forcing the officer to continue firing. Witnesses said they heard at least a half dozen shots.”

Six shots before he went down? That sounds scary and familiar. Though the police say the unidentified man was suffering from “cocaine psychosis.”

But let’s pair that story with another from just yesterday. The University of Illinois at Urbana-Champaign has a twitter account they use to give campus alerts. At 10:16 p.m. yesterday, they tweeted this: 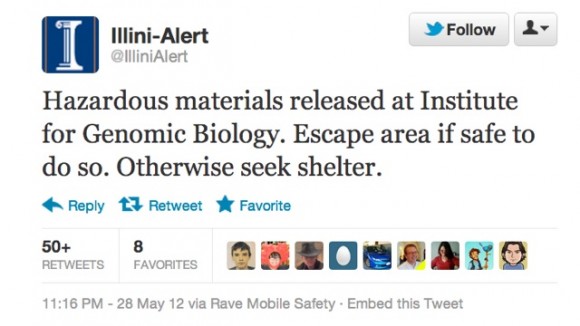 “Hazardous materials released at Institute for Genomic Biology. Escape area if safe to do so. Otherwise seek shelter.”

They later tweeted that the materials had been contained in one building and then reported everything was fine. “The hazardous materials release at the Institute of Genomic Biology has been mitigated and is no longer a threat. IGB will be open tomorrow.”

If you need me, I’ll be gathering supplies and calling my two zombie expert friends for back-up.

(via io9, image by Brendon Thorne)