Shoot At The Sky In Anger: Gerard Butler In Talks For The Point Break Remake 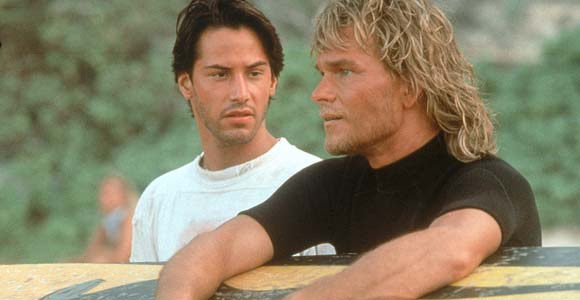 Ok, don’t actually shoot in the air, that’s dangerous. But we shouldn’t be surprised at this news. Alcon is set to remake Kathryn Bigelow’s 1991 film, Point Break with Ericson Core, cinematographer on The Fast & the Furious and Daredevil, directing.

The film starred Keanu Reeves as FBI Agent Johnny Utah and Patrick Swayze as Bodhi, the leader of a surfer/bank robbing gang called The Dead Presidents. Utah and his partner (Gary Busey) have been tasked with taking them down which requires him to go undercover. Hot shots, heartbreak, and awesome 90s fashion filled the screen. It was magical. Now they want to try and capture the magic. They won’t be able to, damn you!

Kurt Wimmer, the writer behind Equilibrium, Salt, and the Total Recall remake, is doing the screenplay on the new Point Break and Gerard Butler is currently in talks to take on Swayze’s role. The Hollywood Reporter writes it will be “set in the international world of extreme sports as opposed to the Southern California surf scene of the original. The plot of an FBI agent infiltrating a crime ring as well as the names of the principal characters remain the same.” Reeves’s role has not been cast yet.

No one can replace The Swayze, no one, but I suppose Butler is the least offensive choice if there had to be someone. What do you think?