Unless you leave the box open, of course. Then you're on your own. 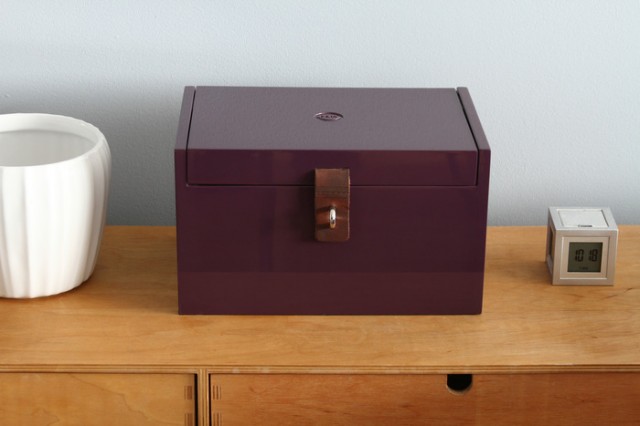 Remember when Jennifer Lawrence told everyone about how the maid at her hotel discovered her (TOTALLY bougbt as a joke, of course) sex toys once? You should, because the video only went up yesterday. She used the phrase “copious amounts of butt plugs,” if we remember correctly. Apparently there’s an easy way to stop that from happening.

Caled the “Pleasure Products Organizer,” this new product, which was designed by “lifestyle” company MUA, comes in two parts — a small satin handled water and lubricant-resistant pouch that has separate compartments for your toys, and a larger lacquered case that looks like a jewelry box, complete with a “discreet” charging station and secure combination lock. So really, if you wanted to, you could probably use this to store all of your regular electronics while they’re charging, too! Wait. No. It’s probably kind of pathetic that we thought of using this box for that first instead of for to intended purpose. We promise we totally all have normal sex lives. Really. Shh.

According to MUA, this is the first product of its kind in existence, which is kind of ridiculous when you stop to think that no one up until this point has considered making a storage case for sex toys. Really? Nobody? That kind of seems like a no brainer, sex toy industry. After all, they make carrying cases for wii motes, and those are basically the same size and shape, right?

The box is also technically the first adult-themed product ever allowed on Kickstarter, as MUA founder Lidia Bonilla will tell you:

As of writing the Kickstarter campaign has only raised $6,964 of their $10,000 goal with 114 backers and 6 days left to go, so if this sounds like a thing that you need to have in your life, then check out their page and donate. You might even et some cool underwear as a backing reward. Everybody needs new underwear.

(via MUA on Kickstarter)