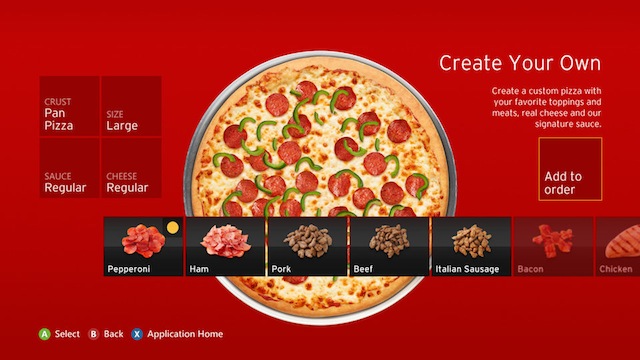 Here are three indisputable facts: 1) Video games are great, 2) eating pizza is great, and 3) putting your video game on hold so you can order and eat a pizza is the worst. That’s how animals live, it has no place in polite society, and every time I am forced to do it, I feel like a savage. But the dark ages of eating pizza and playing video games are coming to an end now that Pizza Hut has released its official Xbox ordering app, sparing us all the grim fate of putting down the controller to order a pizza. Truly, we live in the future. Now we get to find out how long the future will put up with this kind of crap.

The fact of the matter is that when the book is written on the decline and fall of western civilization, I have no doubt that an entire chapter will be devoted to the technological advances that allowed people to order a Stuffed Crust Meat Lover’s Pizza delivered to their doorstep without ever putting down their controller for even a moment. Until, then, though, it is most definitely pizza time!

Seriously, though, I can’t say enough good things about this development. I’m a huge fan of ordering pizza online. I can’t remember the last time I spoke to a person on the phone while ordering pizza, but I’ll wager it was also the last time my pizza order got screwed up. For that reason alone, I’m a huge fan of online ordering. And considering I just started playing through the Mass Effect games, I’ve got some hours in front of an Xbox ahead of me, and this is a thing that brings me great comfort.

Also, Pizza Hut, if you could start some sort of service where the delivery driver hangs around to feed my pizza to me so I don’t have to put down the controller to eat, either, that would be, like, really great.

Kidding, kidding, of course. that’s a step too far…for now. Now if you’ll excuse me, I have to take a look at my financial portfolio and buy up some more stock in forklift companies since that’s the only way you’ll be able to get many of us out of the house in the all-too-near future.