Rare Pikachu Illustrator Card Up For Auction on Ebay, Bidding Starts at $100,000 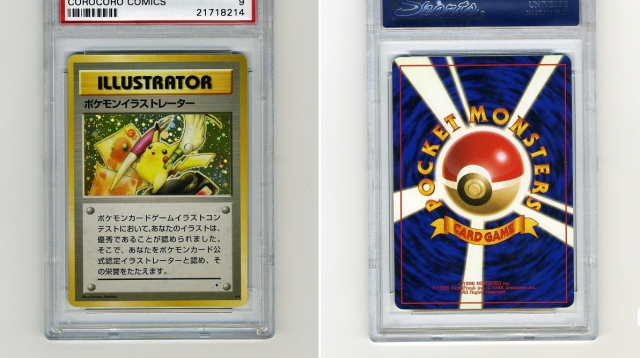 I think every nerd my age had that sad day in their childhood when they realized the Pokémon cards they’d been collecting weren’t really going to be worth anything in the future. Scott Pratte presumably does not have this same problem, because he’s got an unbelievably rare illustrator card from Japan — and now he’s asking for $100 grand on eBay.

The Illustrator batch of Pokémon cards was first printed in 1997 and has since become the most sought-after non-sports trading cards series in existence. They were created as part of a contest in which people submitted their own drawings of their favorite Pokémon, which were then made into actual cards. The above Pikachu card was given out as a promotional items to the contestants who won the drawing contest — there are only six of them in the world. This one in particular  has been graded at 9 mints by the Professional Sports Authenticator (PSA), making it in excellent condition.

Pratte doesn’t actually expect the card to sell at the price that he’s listed the card at, as the last Pikachu illustrator card only went for $20,000 in 2009 (Of course, we say only, but that’s still the most that a Pokémon card has ever gone for). He has acknowledged that he’s gotten some serious offers upwards of $50,000 and hopes to see what the next 12 auction days will bring. After all, it is the “Holy Grail of Pokémon.”