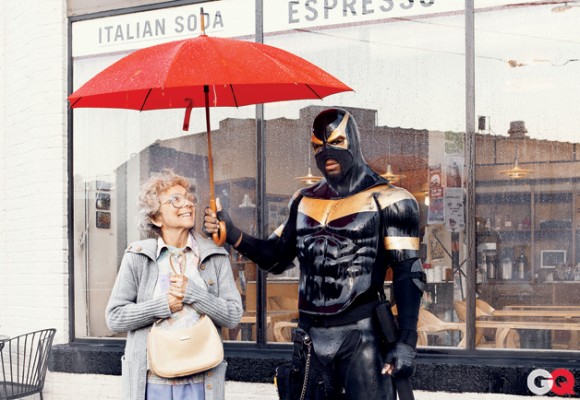 GQ‘s Jon Ronson reported on a recent ride-along with real-life superhero Phoenix Jones and provided us all a lengthy, detailed exposé about the man in the mask who roams Seattle fighting crime. It’s actually a pretty incredible story and reveals more about Mr. Jones than we’ve ever read before. But we couldn’t help noticing that conversations that occur in the RLSH community sound like they’ve been taken straight out of The Venture Bros.

First, allow me to address the whole “peeing blood” thing. When Ronson first meets Jones, it’s in the hospital. Upon landing in Washington, Jones’ spokesperson tell Ronson that his charge is in the hospital:

“I don’t know … The thing you have to remember about Phoenix is that he’s not impervious to pain.” He paused. “You should get a taxi straight from the airport to there.”

Ronson arrives at the hospital where he finds Phoenix Jones hooked up to an IV, in a hospital gown … wearing his superhero mask. Now that’s dedication. Jones explains that following an altercation, he “went to use the bathroom and … started peeing blood … A lot of it.” During the visit, it’s also revealed that Jones has two children with a long-term girlfriend and still names his pediatrician as his doctor because he’s under the age of 22.

Now, we don’t want to undermine the RLSH movement. They are, after all, doing something that most of us would never do, and that is walking head-on into actual dangerous situations and trying to remedy them. Sometimes they even get hurt, as can be expected when one confronts violent people who are prone to violence. But they are wearing costumes inspired by fictional characters. And sometimes, the discussions they have about said costumes sound like the work of Doc Hammer and Jackson Publick:

Knight Owl: I’ve discovered a maskmaker who does these really awesome owl masks. They’re made out of old gas masks.
Phoenix: Like what Urban Avenger’s got?
Knight Owl: Sort of, but owl-themed. I’m going to ask her if she’ll put my logo on it in brass.
Phoenix: That’s awesome. By the way, I really like your color scheme.
Knight Owl: Thank you. I think the yellow really pops.

(Knight Owl is another real-life superhero from Washington’s neighboring Oregon.)

Even we at The Mary Sue have our “Crazy Things Overheard at the Office” moments (recent example: “Hold that thought, I need to make a split second decision about boobs“). But this honestly sounds like “Overheard at the Order of the Triad.” To say nothing about anything referred to as “the Taco Incident.” And we’re not complaining about that one bit. Take this bit from Jones when discussing Master Legend, one of the original real-life superheroes:

“Ninety percent of us think Master Legend is crazy … He’s always drinking. He believes he was born wearing a purple veil and has died three times. But he does great deeds of heroism. He once … beat [a] guy so severely he ended up in a hospital for almost a month. He’s an enigma.”

Make no mistake: we know these guys are serious. Ronson described an incident in which he and Jones, plus two other fellows named Ghost and Pitch Black, confronted a gang of drug dealers in an area that a cabbie refused to remain in for an extended period of time for any amount of money. Somehow, Jones used only his words to one-up these guys, who eventually just walked away. Like they couldn’t believe what they were seeing, or they didn’t want to hurt a crazy person who hadn’t actually done anything to them. But could you call Phoenix Jones crazy?

“They had the weapons, the numbers, but they backed down to the image of Phoenix Jones,” he says.

Crazy like a fox, maybe. Major props to Jon Ronson for writing “The Ballad of Phoenix Jones” for us.