If You Will: Topless Female Duelists 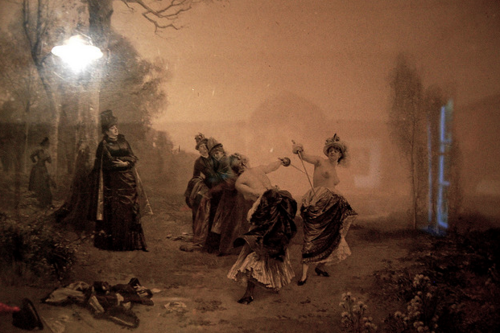 Before we begin, a caveat that some of you who may have happened upon our humble site might have seen the words “topless” and “female” and are expecting something racy. Well, this is not racy. But it is, however, very badass and awesome. And practical. So, if you’d like to find out more about the practice of women dueling while topless, we would love to invite you to read more. But that’s what this is about: the practical reasons why women fought duels while topless. This was an actual, historical thing!

It was actually just a matter of precaution. At the start of an 1892 duel in Liechtenstein between Princess Pauline Metternich and the Countess Kielmannsegg, Baroness Lubinska — who presided over the duel, which was being fought for reasons we will save until the end of the post — insisted that the women remove their clothing above their waists to avoid infection in the event that a sword pushed clothing into the wound it caused. The baroness had seen many instances of septic infection in soldiers for this very reason throughout her years of medical training.

If you’re keeping track, this is:

1. A duel between two women, the first-ever “emancipated duel” that involved not only all female principals, but all female seconds.

2. Women in the Victorian era in Europe fighting topless.

3. An emancipated duel being fought by topless women who were topless at the urging of a woman with formal medical training and a degree who was also presiding over the duel.

In other words, this was pretty crazy for the time. So, are you wondering how this all went down?

At the dueling ground on the fateful day, all formalities were carried out to the letter including an attempt at and refusal of reconciliation. The ladies engaged and, after a few trifling feints and thrusts, a wild slash from the princess brought about a light flow of blood from the countess’ nose. Seeing the injury she caused, the shocked princess, in a stereotypical feminine gesture, threw both hands up to her cheeks. Just then, the countess lunged and pierced the princess through her right forearm. The sight of the ensuing blood caused the respective seconds to faint. The footmen and coachmen, who had been ordered to stand some distance away with their backs toward the action, heard the cries and ran toward the women to render aid. Baroness Lubinska, however, decided the male servants had more salacious motives and attacked them with her umbrella, shouting, “Avert your eyes, avert your eyes — you lustful wretches!”

In the end, Princess Pauline won. And the reason they were fighting? Floral arrangements. For an “upcoming musical exhibition.”