The Phineas & Ferb/Marvel Crossover is Coming, and It’s Glorious

Sometimes there are some perks to Disney owning everything. This is one of them. 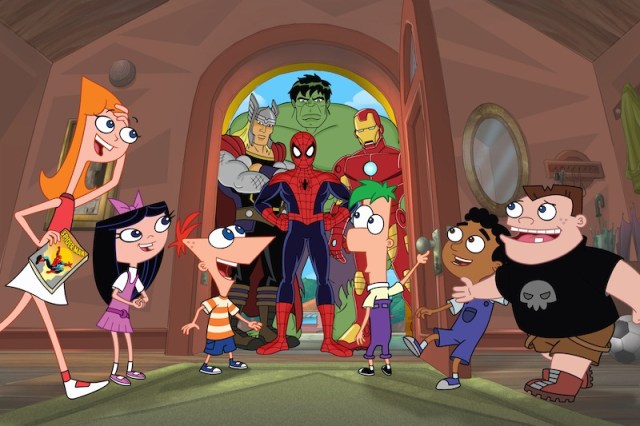 Last year our minds were all blown when it was announced that the beloved Disney channel cartoon Phineas & Ferb would get a special visit from none other than the Avengers in the special Phineas & Ferb: Mission Marvel. Now that its Summer 2013 release date is slowly drawing closer, Disney’s released a trailer of the ensuing mayhem. It’s so, so awesome, you guys. Why weren’t the animated crossovers I watched as a child this cool? All I got was Jimmy Neutron vs. Timmy Turner in The Jimmy Timmy Power Hour.

Here’s what seems to be the basic plot of the special: Thor, The Hulk, Spider-Man, and Iron Man all get zapped by mad scientist Dr. Heinz Doofenshmirtz’s power-absorbing ray and, well, lose their powers — Yes, even Iron Man. He appears to spend most of the trailer getting wheeled around on a dolly, which is amazing. Enter Phineas, Ferb, and their pet Perry the platypus, the only geniuses who can save the Tri-State area.

It’s hard to tell exactly how many of our favorite comic book characters are going to show up, but in addition to the four heroes, I also spotted Nick Fury, Red Skull, Venom, Whiplash, and MODOK. Still hoping that Maria Hill or Black Widow gets some love, but I guess it’s awesome enough that a crossover like this is even happening in the first place.

Check out the trailer for yourself:

My absolute favorite part? It looks like there’s a scene in which they literally recreate the now-iconic panning shot of all the Avengers standing around in a circle ready to save Manhattan from invaders:

Yes, there’s no Captain America and Spider-Man is taking the place of Hawkeye (which I’m sure will excite the fans who have yet to appreciate Hawkeye’s true genius), but there’s absolutely no way this was coincidental. And it’s brilliant.

Unfortunately it doesn’t seem like there’s an exact date yet for release, but the safe bet is that it’s going to air “soon” on the Disney channel. Maybe this means that there the possibility of a Marvel/Star Wars crossover in the future, too, since Disney has those rights as well? The closer we can get to Patton Oswalt’s vision of what that might be like, the happier I’ll be.