The Philadelphia Geek Awards were this Weekend, Here’s Why that’s Great

Enough infighting. It's time to celebrate all geekdom. 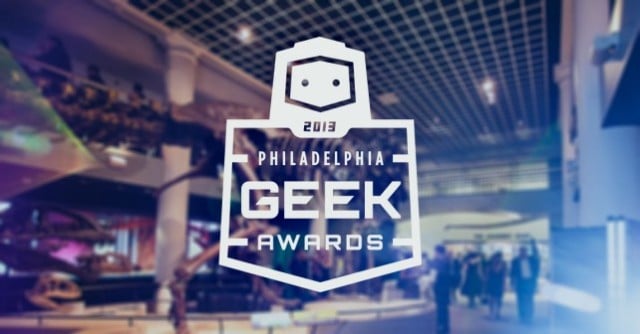 Last Saturday night Geekadelphia and the Academy of Natural Sciences hosted the third annual Philadelphia Geek Awards. More cities should do this, because it’s tremendous. I had a chance to talk to Geekadelphia found Eric Smith about the awards and what it’s like being a geek in Philly.

If there’s anything we love at Geekosystem, it’s celebrating geekdom. It’s kind of the whole point, but unfortunately geeks don’t seem to get much love outside the Internet. The Philadelphia Geek Awards have taken the celebration out into the real world, and that in and of itself deserves to be celebrated.

Glen Tickle: Why did you help start the Philadelphia Geek Awards?
Eric Smith: To honor local geeks doing amazing things, who might not otherwise get this kind of praise. And to call them out in a big way, get them the attention they deserve.

What’s the biggest award you hand out? Do you guys have a “Best Picture”?
Yup! Geek of the Year. Goes out to an outstanding member of the Philly geek community. This year the winner was Dan Ueda, who teaches high school kids about robotics and coaches Philly’s RoboLancers.

Is a RoboLancer a robot who jousts, and if not can you please tell Dan Ueda to make robots that joust?
It is not, but I feel like following up with Dan IMMEDIATELY, as that is an awesome idea.

Conversely, are there any categories that are like “Best Sound Mixing” that no one really understands or cares about?
Haha, nah, I hope not!

Why do you think the Philly geek scene thrives so well?
Collaboration. Absolutely that. It’s an amazing place to be. Everyone supports one another.

Blogs, game developers, app builders… everyone’s always eager to jump in and work together on something, help each other out.

It makes it one wonderful, welcoming community to be a part of.

Also the beer here is delicious.

Here’s a video recap of the awards from Philadelphia’s CBS affiliate:

For more coverage of the event and the list of winners head over to Geekadelphia, and to learn more about what a RoboLancer is you can check out their website.

Full disclosure, Eric is a friend of mine, former college roommate, and I stole his girlfriend then married her.