Physicists Attend Their Own “Oscars,” Receive Serious Cash-Money Prizes for Being Smart 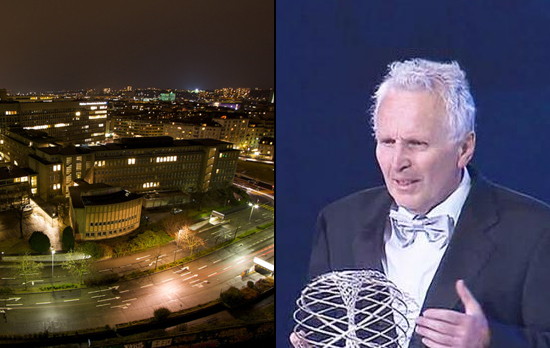 When you think of a physicist, what image comes to mind? An asocial nerd? Stephen Hawking? Me, I think of lab-haunting nerds scratching at chalkboards, drawing equations on restaurant napkins, or playing with lasers all day. But then, my father is a physicist  — worse, a military physicist, the most villainous brand of scientist you can imagine. And I’m here to tell you, they really can be nerdy. They’re also smart and they know how to party. Case in point: Last night was the second annual Fundamental Physics Prize ceremony, a swanky gala funded by billionaire Yuri Milner that handed out $3 million as a top prize.

The brainiacs gathered in Geneva, Switzerland last night in their Sunday best, which I assume involves tweed and bowties across the board. The event was hosted — as all events should be — by Morgan Freeman, who said it was “like the Oscars — only this time you’re in the presence of some of the greatest thinkers in the world.”

So think of this like the Golden Globes, except with fewer dramatic speeches, weepy actors, and red carpets, but with more relevance and a superior expertise regarding the nature of the universe. Although it did include musical interludes and performances.

The big winner was Soviet-born Alexander Polyakov, now of Princeton University, for his work on field and string theory. He’d demonstrated that string theory contains not only thing “strings” of energy but higher-dimensional objects called D-branes.

As to winning the big prize and scoring the cash, Polyakov said:

“It is an interesting experiment and I think the prize could have some potential for attracting bright people to physics. Although usually people who are good and have talent will do physics anyway.”

Hear that, Dad? You’re good and have talent, and didn’t need the promise of big money to become what you are.

Other awards and prizes were handed out as well, but none of these were as hefty as Polyakov’s winnings. Stephen Hawking, also in attendance, was awarded one of two awards for his discoveries in the ’70s regarding black holes and other cosmological theories. He personally thanked Yuri Milner — the Internet tycoon funding the whole event — for the recognition the Fundamental Physics Prize ceremony creates in the field. Recognition that theoretical physicists seldom receive.

See how cool, and lucrative, it can be to become a mathematical physicist? Milner is doing for physics what Indiana Jones did for archaeology. Well, something like that. Fewer whips, I’d imagine.