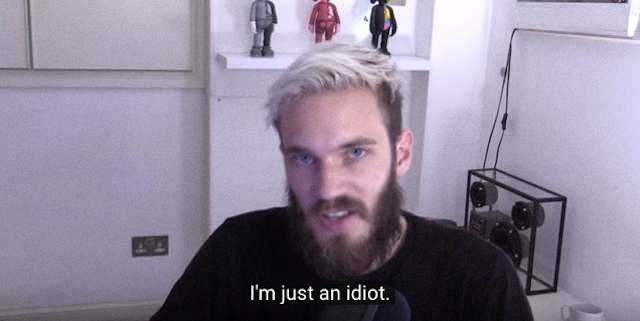 The backlash—and legal actions—in response to YouTube star PewDiePie’s use of racist language has prompted him to issue an apology, because he likes money and fame and would like to keep both.

I’m not a gamer, but as a citizen of the Internet I’ve had to hear a lot about this dude—and over the last few years, about his screwups—and I just. Do. Not. Get. It. From what I’ve seen, PewDiePie (I cannot type this ridiculous handle without laughing) has been applauded by Nazis and the far right, has a long history of disappointing his fans, and inexplicably continues to make millions of dollars by playing video games. I’d appreciate if someone could explain his appeal; every time I see his name mentioned, it’s for making a terrible joke or a reprehensible action like his recent use of the n-word, and while I can understand some fans still flocking to his banner, why he still has the support of brands is mind-boggling.

My friend Alex, an avid gamer, pointed out that there doesn’t seem to be any real ramifications for PewDiePie’s actions: “I think someone should really deep dive into why sponsors continue to support him. Collect statements. Actual statements and not just ‘well, he brings in a ton of money for us’. No one in the gaming journalism community wants to really dive in on this problem and that’s what frustrates me. It’s just ‘he made a bad’ and that’s the end of it.” Not being a part of the gaming journalism community, the continued white glove treatment this guy seems to receive is puzzling and concerning.

At least Kjellberg’s brief apology video, released today and already at nearly 2 million views, is entertaining to watch. Mostly because he calls himself an idiot, and by dint of this demonstrates that he’s capable of self-awareness.

“You probably won’t believe me when I say this,” his response begins, “but whenever I go online, and I hear other players use the same kind of language that I did, I always find it extremely immature and stupid and I hate how I now personally fed into that part of gaming as well.”

Kjellberg said he used the word “in the heat of the moment,” and chose the “worst word I could possibly think of.”

“I’m disappointed in myself,” he added. “It seems like I’ve learned nothing from all these past controversies.”

It’s good that Kjellberg apologized, but bad that this is likely the book closing on the matter for him and many of his fans and sponsors. He’s not sorry about using the word; he’s likely used it many times before. That kind of language doesn’t just emerge from a vacuum. He’s sorry that he was caught. His “aw shucks I just slipped up” approach isn’t enough.

Let’s see PewDiePie make a video where he talks with those disappointed fans. Let’s see him engage with social justice luminaries. Let’s see him put down the joystick and pick up some James Baldwin. Let’s see him do the work to be better and not just lip service. But more importantly, let’s see some courage from sponsors taking a stand and refusing to have their brand associated with him any longer. The copyright claim filed by the makers of Firewatch was a great start but it wasn’t enough.

non-black people who “slip up” saying the n-word in public are the same ones regularly saying it in private.

Already, the comments on the video are filling up with excuses on his behalf. “Nobody’s perfect.” “Saying one word does NOT make you a racist.” “Don’t get yourself down, we don’t hate you for saying that word, it’s just that the world is getting more and more offended for no reason.” “If you’ve ever played any video game online, then you know how common this word is.” Essentially, racist boys will be racist boys, and there’s nothing that can be done about it. “Lol the comment section is full of n-word,” points out one commenter.

It’s days like this I’m glad that the last video game I truly loved was Super Mario Land 2.