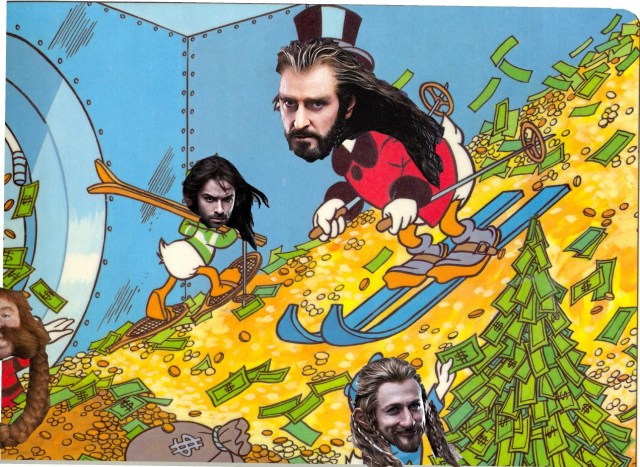 Last year word was Peter Jackson’s time on The Hobbit trilogy so far cost double what The Lord of the Rings trilogy did to make. But a new report has the films running Smaug hoard numbers.

According to Box Office Mojo, Jackson’s The Lord of the Rings films cost $281 million to make. Of course that was just a drop in the bucket as the films went on to make $2.92 billion at the box office, but it seems the bar of gold has gone even higher for The Hobbit.

Financial documents filed this month in New Zealand, where the three movies are being made, show production costs through March had reached 934 million New Zealand dollars ($745 million).

The figures include filming and digital effects completed over several years but not the final eight months of production costs leading up to the scheduled December release of the final movie. It’s not clear from the documents whether worldwide marketing and distribution costs are included.

Together the films are the most expensive to date (though not if counted individually, but let’s face it, it should have just been one movie anyway). And so far the first two have made $1.98 billion, so I doubt anyone at New Line or Warner is going to complain. But still, that’s a chunk o’ change, and they certainly aren’t making the kind of profit they did on LotR.

The record for a single film with the highest production costs goes to Pirates of the Caribbean: At World’s End with $300 million.

(thanks to our own Rebecca for the epic photoshop above)