Peter Jackson: I’d Direct an Episode of Doctor Who In Exchange for a Dalek 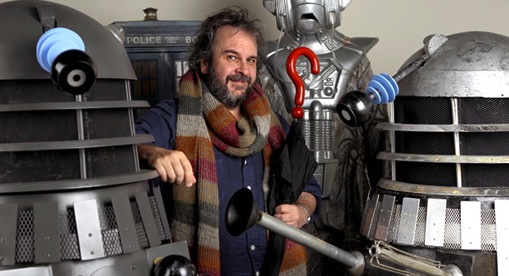 Remember when Matt Smith said he wanted Peter Jackson to direct an episode of Doctor Who and Peter Jackson responded that yes, he would absolutely be OK with doing that?

Well, Peter Jackson remembers it. What’s more, he’s still very keen on the idea. He doesn’t even want money for it.

He just wants a Dalek.

Jackson met Steven Moffat around Christmastime and took pains to assure the Doctor Who showrunner that no, he wasn’t joking, just let him direct an episode already, dammit. “They don’t even have to pay me,” wrote Jackson in an Entertainment Weekly piece on Doctor Who, “But I have got my eye on one of those nice new gold-colored Daleks. They must have a spare one (hint, hint).”

(If Jackson did get his hands on one of the new Daleks, that would bring his count up to three—the two Daleks in the picture above are ones Jackson, a fan of the show almost since it began, owns himself. You planning to take over the world, PeeJ?)

When asked by EW to comment on Jackson’s offer, Moffat declined to say anything specific, noting instead that “You’d never get any information like that out of me!” (I imagine that statement was coupled with a sinister-sound cackle and a twist of his non-existent moustache.) However, he added: “We’re theoretically on board for anything, provided we’ve got a great story.”

Story? We can do story. Somebody get on that! Preferably it’d be set in New Zealand. Peter Jackson directing an episode of Doctor Who is something that needs to happen.