Peter Dinklage Doesn’t Watch Game of Thrones, But Why? 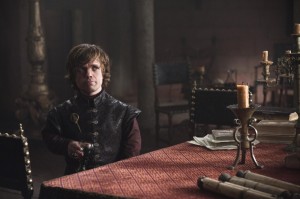 “Well, that was like a year ago for me” –Peter Dinklage, who plays Tyrion Lannister, when asked whether he was excited for the final episode of Game of Thrones’ third season.The Emmy winning actor went on to say “I don’t watch the show… I don’t have HBO” when prompted to give his opinion on the Red Wedding scene from “The Rains of Castamere”.

The news that Peter Dinklage doesn’t watch Game of Thrones isn’t all together surprising considering plenty of actors don’t watch their completed works.  On the other hand, this is an off hand comment, not from an interview, so Dinklage could simply be favoring brevity or sarcasm over the truth.  However, if Dinklage doesn’t watch simply because he doesn’t have HBO, I can only say that many people have managed to circumvent that particular obstacle.  Of course I doubt he would actually want or need to pirate his own show, unlike a record breaking number of viewers did last sunday.  A Lannister always pays his cable after all.

(via blastr, TMZ)
Previously in Game of Thrones