Peter Davison “Meh” On Return For Doctor Who 50th Anniversary 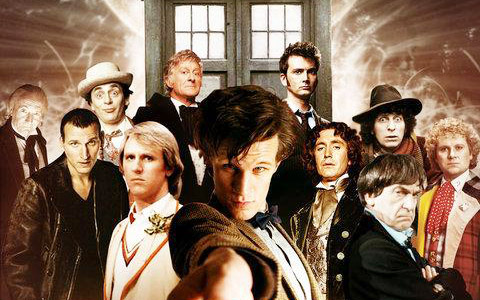 He played the 5th Doctor in the long-running British TV series but actor Peter Davison thinks he and his fellow Doctors may be too old to ever rejoin the series. Even for its 50th anniversary. Peter, allow us to tell you how wrong you are.

The actor returned to the series in 2007 as the celery-wearing 5th Doctor for the Children of Need Special short called Time Crash and in a timey-wimey skit starred alongside the 10th Doctor David Tennant (who is also his soon-to-be son-in-law in real life). Did it look a little weird because Davison had aged? Sure. Did anyone care? No! Because it was awesome! Well here’s what he had to say about another return.

“I feel no need to turn my back on it, but I don’t feel like it’s the kind of thing they’d do,” Davison told BANG Showbiz. “I’d be very surprised if they tried to do anything involving the old Doctors because it always takes a slight stretch of the imagination anyway to figure out why the previous Doctors look older, but I’m sure that can be done.”

Davison said, “I’m perfectly happy to have played my part to go back to ‘Time Crash.’ I don’t feel like I’m hanging on a phone call from the Doctor Who offices saying let’s do something special.”

“Unfortunately, there are less and less Doctors around to bring back,” he continued, “Maybe I can be in it without never having do any work and just turn up so they can take my image. Maybe the characters can into a computer and become animations — that would be good. It could be like Doctor Who and The Simpsons or something.”

Recently, the current Doctor Matt Smith made comments leading many to believe that he himself would not even be on the show when the 50th anniversary came to pass although he seems like the kind of guy who would jump at the chance if it arose. The 9th Doctor, Christopher Eccleston has gone on record saying he definitely did not want to return to the role but Tennant definitely would. The 8th Doctor, Paul McGann, continues in the role via audio plays and has said he would return if asked, Tom Baker has also done audio plays. Back in 1983, actor Richard Hurndall replaced the First Doctor (William Hartnell, who had passed away) in the 20th anniversary special, The Five Doctors. Patrick Troughton and Jon Pertwee are also no longer with us but have appeared visually on screen in the current series so really, anything is possible.

What are you hoping to see in the 50th Anniversary of Doctor Who?

(Doctor Who TV via Blastr)