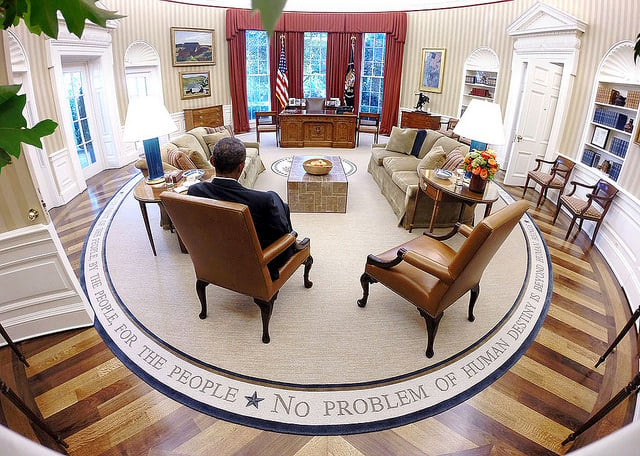 This week, Sarah Palin was invited to the White House for dinner, and according to her blog, she was invited to bring a few friends along. And because, I suppose, some people just want to watch the world burn, she chose Kid Rock and Ted Nugent. You probably saw the pictures going around: they in their cowboy hats, she in her festival season finest, posing with Trump in the Oval Office.

Sarah Palin at the White House last night. Who knows which Ambassadorship she’ll end up with! pic.twitter.com/hSwdYvkRtg

The good news is that Sarah Palin will be keeping an eye on Russia, which she can see from her house pic.twitter.com/4IcfXQzDB3

Then the group tracked down Hillary Clinton’s White House portrait from her days as First Lady. Palin, Kid Rock, and Nugent—the last of whom once called for Barack Obama and Clinton to be hung, called Clinton a “devilbitch,” and, oh yeah, wrote a song about wanting to rape a 13-year-old girl—took a picture sneering in front of the portrait, because winning* an election just doesn’t mean anything if you can’t also rub it in your opponent’s face, right?

The internet comments and professional commentators alike are dragging the picture for its immaturity and tasteless disrespect. (The View’s Joy Behar, for example, asked “Is this the saddest day in the history of the White House since the British burned it to the ground in 1814?”)

But if you’re like me, you were waiting for the clapback from one specific person: Pete Souza, President Obama’s former White House photographer. We love Souza around these parts for his expert ability to throw the most brilliant, scathing, and completely indirect shade through strategic repostings of old photographs on Instagram. He was ready for this day. Here’s what he posted, with the simple, contextually brutal caption, “Being respectful.”

This is your regular reminder not to ever get on Pete Souza’s bad side.