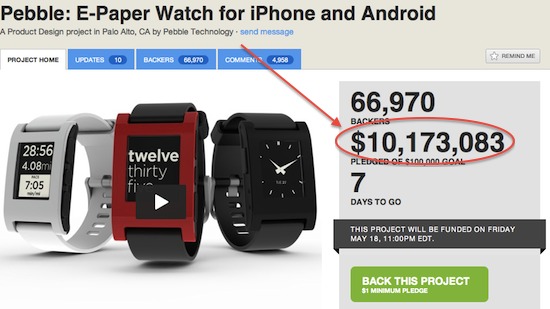 When we last heard about the app-running, iPhone controlling, Pebble e-paper watch, it had just set a record for fundraising on Kickstarter by pulling in $5 million dollars. That was all the way back in mid-April, and with a week left to go the Kickstarter project has doubled the amount pledged by supporters to $10,173,047. Methinks this record won’t be broken anytime soon.

We’ve been following the story of the Pebble for a while, but for those unfamiliar it’s a watch that communicates with your iPhone (or Android device) via Bluetooth 4.0. This allows information to flow between your phone to your watch — things like speed and distance for bikers and runners; text messaging and the caller-ID information displayed right on your wrist; or controlling the music on your phone from your watch. What’s more, its e-paper face is completely customizable, so even if you’re not down with the whole smartphone-syncing thing that’s pretty rad.

In addition to all that, the watch’s creators will be releasing a free SDK for everyday folks to build their own apps or watch faces for the Pebble.

Cresting $10 million first and foremost says a lot about the desirability of a device like this. Not only has the concept drawn in a lot of backers, but every single premium — even 31 slots at the $10,000 level — where a watch was offered have been filled. You can still donate $1 to be kept up to date on the status of the watch, however all of the options that would have netted you a watch have been exhausted. Of course, with this kind of money the Pebble is almost sure to come to market so you could always buy one for $150 (the lucky ones that donated to the Kickstarter to get a watch had to pay a minimum of only $100).

While the fellows behind the Pebble watch are probably considering what they’re next move will be, the real winner here is probably Kickstarter. Their terms of service say that they take a 5% cut of all the money raised through their website, which means that for this deal alone the company will take in $500,000. Considering that last year the company raised $119 million and walked home with $6 million of that, 2012 is shaping up to be a banner year for the fundraising website.

(Kickstarter via The Next Web)