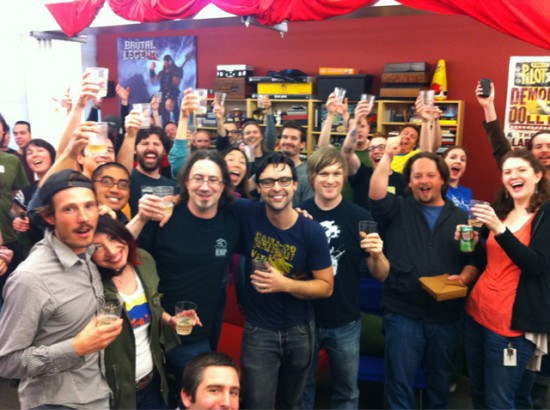 As of yesterday morning, Tim Schafer’s game studio, Double Fine, posted a project on Kickstarter trying to raise money for an old fashioned point-and-click adventure game. Within a few hours, the project raised half a million dollars, and there weren’t any signs of the funds slowing down. Within 24 hours of the project being posted to Kickstarter, it raised over one million bucks, setting a Kickstarter record. The best part for both fans and Double Fine alike aside from making Kickstarter history? At the time of this post, the project has raised over $1.3 million, significantly higher than the initial $400,000 goal.

The previous Kickstarter record holder set the record not too long before Double Fine’s adventure game project, funnily enough. The Elevation iPhone Dock is currently sitting at over $1.1 million raised, from an initial goal of $75,000.

If you’re wondering what Double Fine is going to do with all that extra money aside from spend it on the lavish celebration seen in the picture above that was tweeted from Tim Schafer’s account, it’ll be put toward making the game and accompanying documentary by 2 Player Productions better:

All money raised will go to make the game and documentary better. Additional money means it can appear on more platforms, be translated into more languages, have more music and voice, and an original soundtrack for the documentary, and more!

So, hopefully we’ll get a game that’s about $700,000 better than Double Fine initially expected. Also, it’s fun to point out that the pledges are still coming in, and at the start and end of this post, the project gained another two thousand bucks.