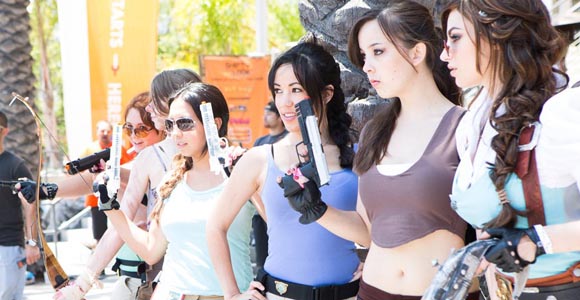 Convention harassment is just an off-shoot of regular, old harassment but seeing it invade your “safe space” can be tough to stomach. And some people have had enough. At PAX East this past weekend, a journalist (I use that term loosely) decided to interview a group of Lara Croft  cosplayers at the new Tomb Raider video game booth. What followed was not a professional interview of fans but rather a chance to treat women in costume not as people, but as sex objects. The Mary Sue spoke with one of the cosplayers involved as well as PAX management about the situation – a situation we’re hearing about far too often these days.

We were alerted to the situation the day it occurred, Saturday March 23rd at PAX East in Boston. Meagan Marie, Community & Communication Manager at Crystal Dynamics (developers of Tomb Raider), tweeted, “Had a member of the press use the ‘Cosplay is Consent’ argument on me after asking a sexual question on film to a group of Lara cosplayers.”

This caught our attention because of a situation that occurred at New York Comic Con 2012 in which Black Cat cosplayer Mandy Caruso was harassed during an interview. She related her story on Tumblr, and while she never named the media outlet, there was considerable outrage about her treatment at their hands.

So what exactly happened at PAX East? We spoke with Lauren Wizemann, one of the Lara cosplayers involved in the incident. A frequent cosplayer and convention attendee, Wizemann decided to do a more casual costume for PAX.

“At other conventions I have done more revealing costumes like Rogue, Emma Frost, Huntress, and Wonder Woman. I had always liked the Tomb Raider game, the comics and the movies. I had played the demo in SDCC this past summer and was just blown away by the graphics and just how incredible it was. I decided on Friday to wear khakis, a grey tank top and my official Tomb Raider necklace to the Tomb Raider panel.”

It was at that panel Marie encouraged Wizemann to don the costume again the next day because Crystal Dynamics would be holding a cosplay event at their booth. And so she did. Wizemann was joined by several other women, making them a group of 15-31 year-old Lara Crofts. She said, “The other Laras all wore khakis, combat boots, grey tanks, had a bow and did some blood makeup. I think we were all pretty excited.  We were taking pictures in the booth and then we moved out towards the walkway so that people walking by could see a group of Lara Crofts. We took more pictures and then this guy comes up and asks if he could ask a few questions. His partner had a more professional looking camera and so I think all of us just shrugged and said ok.”

Wizemann had been interviewed in the past and said everything seemed normal. That is, until the interviewer asked his first question, “How does it feel to  be at a convention where none of the men could please you?”

In a post on her Tumblr, Marie wrote, “I couldn’t hear what he said over the hubbub of the show floor, but the confused and uncomfortable looks from the ladies indicated that it wasn’t what they expected, to say the least.”

I moved in closer and inquired “Excuse me, what did you ask?” with a forced smile on my face, so to give him the benefit of the doubt. He laughed and didn’t respond, moving a few steps away as I repeated the question to the group of women. Turns out he’d probed what it felt like “knowing that none of the men in this room could please them in bed.” Yes, I’m aware it’s a poor adaptation of a gag told by a certain puppet dog with an affinity for insults. Lack of originally doesn’t excuse this behavior, however.

My anger flared upon hearing this, and for a moment I almost let it get the best of me. I attempted to calm myself down before walking towards him and the cameraman, and expressing that it was rude and unprofessional to assume that these young women were comfortable discussing sexual matters on camera. I intended to leave the conversation at that, but his subsequent response escalated matters quickly and clearly illustrated that this ran much deeper than a poor attempt at humor. He proceeded to tell me that “I was one of those oversensitive feminists” and that “the girls were dressing sexy, so they were asking for it.” Yes, he pulled the “cosplay is consent” card.

At this point, as he snaked off into the crowd muttering angrily at me, I was livid.

Yes, sadly we still live in an age where people try and excuse inexcusable behavior because of how someone is dressed. Wizemann said, “Honestly, I couldn’t think of a less sexualized costume at the event, but I suppose anything worn by a woman can be ‘sexualized.’ I’ve worn outfits that were completely spandex and ones that have shown a lot of skin and yet out of the hundreds of people I have interacted with, I don’t think anything like this had ever happened to me while I was cosplaying before.”

“The fact that something like this still occurs regularly at conventions makes me sick, and that people try to justify away the behavior,” Marie wrote on Facebook. “I went to PAX with PR. The positive side to this story is that they took the issue incredibly seriously, and were apologetic for his behavior,” she wrote, also saying they handled the issue “with flying colors.”

We reached out to PAX for a comment from their point of view. Robert Khoo, President of Penny Arcade, Inc. responded:

Our media guests are expected to behave in a professional manner, and it was clear to us this particular individual crossed that line. We got in touch with the outlet and the individual during the show, and that particular journalist is no longer welcome at PAX. We want everyone at PAX to feel welcome and comfortable, and that includes those that staff the booths.

It’s great to hear an unfortunate situation was dealt with swiftly but we have to ask – when will this type of behavior stop? For Wizemann, it came as a shock.

“I’m pretty sure my initial reaction was one of those stunned chuckles, but I think I was too caught off guard to be angry or upset at the moment,” she said. “It wasn’t until later when the shock wore off and analyzing what happened that I realized how messed up the whole thing was. I’ve been victimized before and none of the times have I ever reacted immediately. I don’t know if it’s the way I’m programmed to just smile and accept or if it’s just a fear of making a scene.”

In her extremely poignent Tumblr post, Marie touched on this particular behavior – something she isn’t immune to.

Similar behavior has been directed at me for years. Back in 2007 at my very first GDC, I was starry-eyed and overwhelmed to be in the midst of so many people I idolized. So when a drunken CEO of a then-startup pointed to my midsection and said “I want to have my babies in there,” I laughed. I did the same next year when another developer told me that he “didn’t recognize me with my clothes on” after meeting me the night prior at a formal event (to which I wore a cocktail dress). The trend continued for years, and I took it silently each and every time.

This is something we see a lot, and something you may have experienced yourself – being able to stand up for others but failing when negative behavior is directed at you. “I know it took a lot of guts for her to do what she did. And to have one of my peers feel the need to protect me, it was unsettling,” Wizemann told us. “I felt very guilty and shameful because there were young women in our group and I couldn’t do anything about it. Granted, no one should have to experience that, but it’s worse when it’s a kid or a teenager who might not have the personal tools and experiences to handle it. The least I can do is talk about it and help raise awareness that this stuff happens.”

Marie is of the same mindset. “I’ve got hope for change even if it is motivated by fear. In a social economy where one unprofessional tweet can ruin a career, I feel like the few unsavory industry personalities are becoming more aware of their words. My line in the sand doesn’t end there, though. I’m going to start holding commenters accountable for their actions too, even if I can only do so on my social spaces,” she wrote. “The situation this weekend at PAX made me question why I’m willing to stand up for others, but not myself. By allowing myself to be treated this way I’m perpetuating that this behavior is acceptable. And it isn’t. If I continue to stand by silently, I might as well sit on the sidelines and watch while other young women endure what I have.”

Whether it’s joking about harassment in a comedy video to teach a lesson or simply speaking up when it happens to you, talking about it is the key to change. As far as journalists are concerned, it should go without saying you should ask interview participants if they are comfortable speaking about the topic you want to talk about.

“I want to feel safe and valued as a member of this industry, whether I’m conducting an interview, talking to fans on a convention floor, or cosplaying. And I have a right to that,” said Marie. “I’m not afraid anymore. I’m angry.”