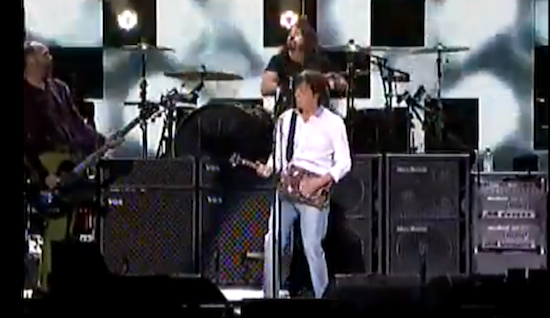 Those attending the 12-12-12 concert for Sandy relief last night were hit with a dual nostalgia wave of mid-’90s grunge and Beatlemania when former Beatles bassist Paul McCartney was joined on the stage by Dave Grohl, Krist Novoselic, and even Pat Smear of Nirvana fame. Rumors had circulated for quite some time prior to the benefit concert regarding McCartney playing alongside a reunited Nirvana, with some going as far to assume that the Beatle had brought the band together himself or that he was actually going to join them. Misinformed hyperbole aside, fans praised McCartney temporarily filling in for the late Kurt Cobain as Nirvana’s frontman.

Paul McCartney and Nirvana surprised an unsuspecting audience with the announcement that they would be playing a new song entitled “Cut Me Some Slack” — a piece that just makes you want to rip your jeans, don a disheveled plaid shirt, and have a jaded, apathetic outlook on everything. All we want to know is when this song will be available on CD at Starbucks.