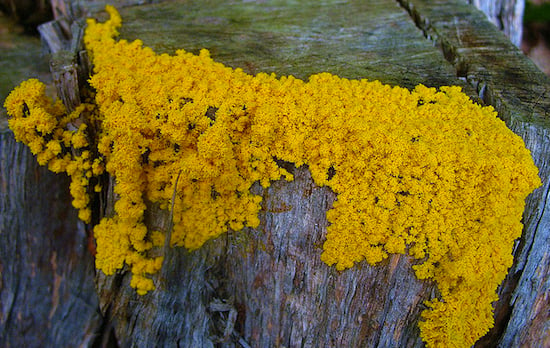 With enough time and patience, research has proven that you can get slime mold — specifically Physarum polycephalum — to do pretty much anything you want it to, such as finding its way out of simple mazes and other talents that make you forget the little critter doesn’t even have a brain to begin with. Recently, man’s obsession with slime mold has led them to once again test the capabilities of Physarum polycephalum, namely whether or not it’s able to produce sound. And as it so happens to turn out, you pump enough electricity into the slime mold and they’ll, in a fashion, start to produce “music.” That is, of course, if you find its tiny, anguished screams of pain melodious.

University of Plymouth physicist Eduardo Miranda and his associates conducted an experiment using electrodes to document how slime mold produces controlled noise when exposed to electrical stimulus. Six electrodes were positioned around a Petri dish containing Physarum polycephalum. Using oat flakes to entice it, the slime mold grew its protoplasmic tubes between each node of the devices in order to reach the food. This growth process took approximately one week to complete as researchers measured the electrical output from each electrode that the mold had grown on every second.

Once the slime mold’s protoplasmic tubes had spread to all six of the nodes, it began to produce signals via the electricity traveling through them. These electrical signals were then used to control the frequency of an audio oscillator, combining the resulting outputs to form a cohesive sound. As if having the chance to hear what slime mold sounds like isn’t amazing enough, the electricity coursing through Physarum polycephalum can be adjusted, yielding different frequencies and subsequent sounds.

Since cultivating slime mold is such a lengthy process that cuts into valuable experimentation time, Miranda was able to use the collected data from the experiment and input it into a computer simulation that creates and expedites the growth and tuning processes of the slime mold. From these sounds they were able to compose a musical piece entitled “Die Lebensfreude in Portugal.” Not to sound like uncultured philistines, but until the day they manage to have slime mold belt out Queen’s “Bohemian Rhapsody” in full, we’ll pass on that fancypants neoclassical stuff, thanks.