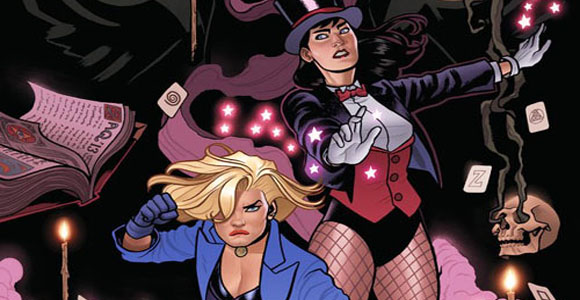 Paul Dini has been pretty outspokenly pro-female fans in the past, even in the face of direct opposition.  He’s also well-known for writing a lot of female characters that do well with female fans, such as Harley Quinn and Catwoman.  But Dini admits that many female fans of comics characters were made fans by other media outside of comics because of the success of shows like Batman: The Animated Series.  It is those fans that he hopes to attract with the upcoming Black Canary and Zatanna: Bloodspell original graphic novel with artist Joe Quinones.

In a recent interview with PREVIEWSworld, Dini talks about those fans and what they can find in his upcoming comic:

I think there is a new breed of female fan that has grown up with superheroines over the last twenty years and continues to embrace them. I don’t think they are inspired just by comics, but by the TV shows, movies, and cartoons they watched, and games they played when they were younger — so many tell me they were fans of  Batman: The Animated Series, or anime, or Dr. Who or Star Wars, the list is endless.  And they bring a great sense of humor and play to things like comic conventions.  I saw an article on cosplay in Entertainment Weekly last year and almost half the cosplayers on a two page spread where dressed either like Harley Quinn or Zatanna!  It seems to me if they identify with the characters that much, there’s an audience there that would appreciate some comics that reflect their sensibilities.  I just hope our little GN strikes the bullseye.

It’s nice to hear a comic creator talk about the female fan as something other than a demographic to be dismissed.  This OGN has been in the works for a very long time at this point, so it’ll be interesting to see how it is received now that it’s finally about to see the light of day.  Dini also had an interesting observation to make about why he likes to write supporting characters:

The DC Universe is a vast playing field, and it definitely has its quarterbacks and star players in characters like Superman and Wonder Woman. But everything is cyclical, and even Batman had some down years in the late sixties after the TV show and Bat-Mania had run its course.  It doesn’t hurt to focus on some of the lesser-known players in special projects now and then to try and turn them into more fully developed characters, and in some cases, fan favorites.  Certainly Hawkgirl’s exposure in the Warner Bros. JLA series did that for her. It’s great to do the big Batman story to end all Batman stories, but if the rest of the superhero pantheon becomes as well-known, then that gives writers and artists more chances to tell big stories about characters who might always remain supporting players.

This is a point seriously worth considering for DC and companies like it as they hopefully look to add more diversity to their lines.  By letting writers and artists take on characters that aren’t as well-known as the famous heroes like Superman, Batman, and Wonder Woman, they give the characters a chance to be more fully developed and thus get more fans interested in them. There’s only so many Batman films you can make, right?  It would be worth tracking how comics do when they feature more unique, less well-known characters that are given into the hands of creators who really want to develop them versus only well-known characters (usually straight white males) being given the full support of the company.  After all, Geoff Johns took often neglected character Green Lantern in hand just over a decade ago and the comics did so well that DC invested in an (admittedly pretty horrible) Green Lantern film. Why wouldn’t this work with other characters and the right mix of creators left to craft interesting stories?   Hopefully Dini and Quinones’ book does well enough that DC has to consider this approach because it’s not only creatively interesting, it’s profitable.