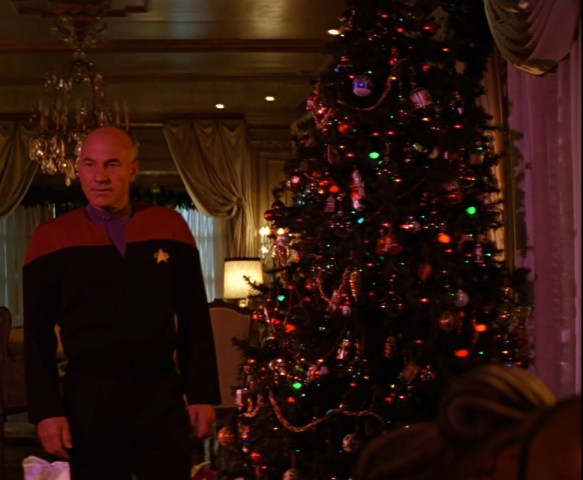 Fun fact! Though in the final cut of The Nightmare Before Christmas, the opening poem is said by Edward Ivory (who also plays “Sandy Claws”), originally Patrick Stewart had been tapped to provide his voice to the narration. The studio recorded his reading and did not use it, instead throwing it in the soundtrack. We sort of wish they had used it, though, because it’s amazing.

In addition to being read by the great Patrick Stewart, this version of the intro is a bit longer and focuses more intently on the viewer:

There’s also an ending poem they never used, which sets up that the poem’s speaker is Santa. He comes back to visit Jack after all the fuss has died down and asks him about his experiences:

It makes an odd sort of sense, then, that Edward Ivory was given the narration to say instead — perhaps Stewart was brought in for a draft of the film that didn’t have Santa speaking a whole lot and then was too busy to bring back once they’d expanded the role, and then they decided to scrap the ending poem anyway after getting Ivory to say the lines. How great would a Patrick Stewart Santa Claus be? Not that Ivory isn’t completely capable, of course, but c’mon.

There are also recordings floating around from the Nightmare Before Christmas DVD of Patrick Stewart reciting Tim Burton’s original poem, which he used as inspiration for the film. You can check out Part 1 here and Part 2 here. Trust us, it’s worth it. We’d listen to Stewart recite the phone book if that was a thing he felt like doing (or if we knew where to even get a phone book anymore).

(via Tor, image via Star Trek: The Next Generation)