Pan’s Labyrinth Musical In The Works, We’re Just As Confused As You Are 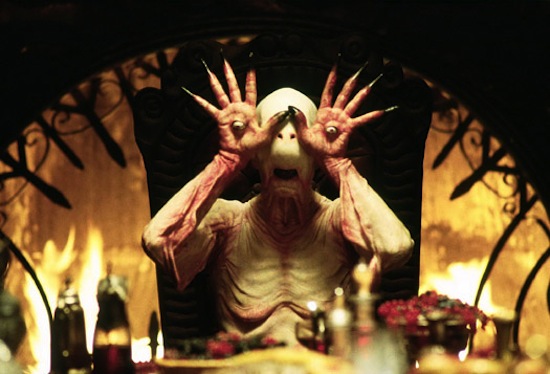 Pan’s Labyrinth, Guillermo del Toro’s hallucinatory fairy tale of a family unravelling and a young girl’s descent into insanity in the midst of the Spanish Civil War is being adapted into a musical for the stage. We really don’t know what to say on this one, as there’s not exactly a whole lot of words in that last sentence that exactly scream “song and dance routine” to us. Then again, what the heck do we know? This thing could end up being the next big Broadway smash — like Annie, but with way more phantasmagoric monsters and people being shot.

According to Deadline Hollywood, del Toro is not only behind the project, but the driving force making it happen. He’s been working quietly on the adaptation for four years now, and apparently found a few spare moments in the process of directing Pacific Rim and being rumored on/backing out of a staggering number of projects to co-author the book for the stage adaptation. Composer Gustavo Santonalla — a two time Oscar winner for his work on Brokeback Mountain and Babel — is signed on to write music, while lyrics look to be the province of Paul Williams, who Muppet fans may know as the writer of “The Rainbow Connection.”

Okay, you know what, the more words I type about it, the more into this idea I am. I can’t be alone in wanting to hear the menacing moans and hisses of The Pale Man set to a stirring upswell of strings or see the film’s faun in a delightful top-hat-and-tails dance number, can I? Hell, it occurs to me that I would probably check this out just for the makeup and visual effects alone. We’ll admit, too, that there’s a certain operatic tone and arc to the film that could really fit the stage if done right, and there’s every indication del Toro is devoted to doing this right.

That said, and while we respect del Toro’s right to go his own way artistically and pursue projects he’s interested in…this is what we get instead of an adaptation of At The Mountains of Madness? Why are you trying to hurt us, Guillermo? Just tell us what we did and we’ll make it right. We’re sorry already.