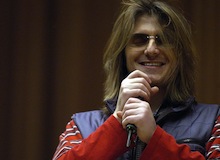 As per Pandora’s usual M.O., users can either search for comedy by a given comedian and create a station containing bits by that and similar comedians, or they can subscribe to one of Pandora’s precreated comedy channels, such as “Today’s Comedy,” “80s and 90s Comedy,” “PG Comedy,” or “Urban Comedy.” This is all free, of course.

Just like music stations on Pandora, comedy stations can be personalized to each individual’s taste

Powered by the Comedy Genome Project™

Listeners can create comedy stations based on their favorite comedians, or on popular genres such as political comedy, working class comedy, PG comedy, or comedy from the 2000s, 60s and 70s, or 80s and 90s

OAKLAND, Calif. MAY. 4, 2011 – Pandora, the popular internet radio service, today announced that comedy is now available on the service where radio stations can be created and Personalized.

Pandora, known for pioneering personalized music listening and discovery, is broadening its array of content to include comedy in order to meet the requests of its listeners. A team of Comedy Genome Project analysts at Pandora has analyzed thousands of performances to capture their comedic style and content. Additional comedic material is being analyzed daily.

Pandora Founder and Chief Strategy Officer Tim Westergren said, “Pandora is about creating a great, personalized radio experience. Comedy is a natural part of that experience, and it’s something our listeners have been asking us to deliver for a while. We are delighted to now be able to give people a mix of familiar and new comic material that they’ll love to listen to.”

Starting today people can listen to comedy on Pandora in the same manner that they listen to music: by choosing a favorite artist or genre as a seed to start a station and then giving thumbs-up or thumbs-down feedback to shape the station to their individual taste. Like music stations on Pandora, comedy stations will play the seed artist and related material.

John Hyde, Vice Chairman of Image Entertainment, Inc. said, “Everyone knows Pandora – it’s unique in the entertainment industry for personalizing the radio experience for listeners and enabling talented artists to discover audiences that will love their music. Image is delighted that our comedy content is being included in the Comedy Genome Project and believe that Pandora’s reach with so many listeners offers an unprecedented opportunity for all comedians. It’s going to be fascinating to see how personalized radio tackles the comedy listening experience, it’s a new frontier and we’re excited to be a part of it.”