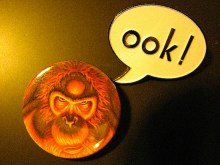 Aan, an orangutan found in the Indonesian province of Central Kalimantan, is stepping back from death’s door and recovering nicely after being found shot more than 100 times with an air rifle. Aan was found earlier this month with 37 pellet wounds to the head and another 67 in the body including pellets lodged in the heart and lung. While the wounds have taken Aan’s left eye, the orangutan, who is being cared for in a Borneo rehabilitation center, is now expected to survive.

Sources differ on Aan’s sex — the orangutan has been reported as a male and a female — but one thing is for sure: Aan is one tough customer. That’s good news, considering that orangutans are an extremely endangered species, due to humans encroaching on their habitat and doing momnumentally revolting things like shooting them hundreds of times with air rifles.

As to what motive someone could possibly have for firing an air rifle at an orangutan more than 100 times, we don’t know that yet. Maybe they are an awful monster? Probably, but that’s just conjecture on our part. What we can say for sure is that somewhere out there is a total dick with an air rifle that’s about 100 pellets light, and there’s not a hole on Earth deep enough to throw that person down.

As for Aan, we firmly believe that after such an experience, that orangutan should be allowed to do whatever it wants from here on out. That said, being faced with the prospect of an orangutan this hardcore, we’d be remiss if we didn’t suggest some librarian training. Just a thought.