Indonesian Zoo is Trying to Get Their Smoking Orangutan to Quit 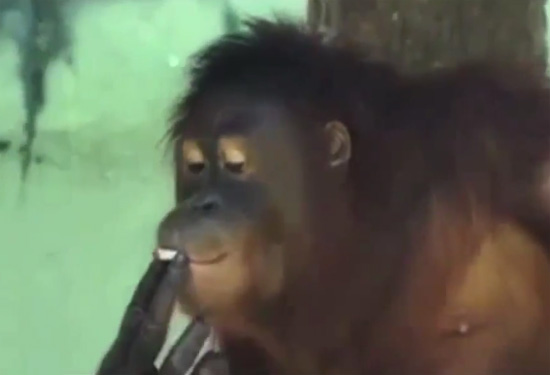 For the past decade or so, Tori the orangutan has impressed visitors at the Satwa Taru Jurug zoo in Indonesia with her smoking habit. The 15-year old great ape apparently picked up the habit from imitating zoo patrons and picking up their discarded cigarette butts. Now, the zoo is intervening and plans to cut Tori off, cold turkey.

Since Tori picked up the bad habit, visitors have apparently taken to throwing lit cigarettes into Tori’s enclosure, the welfare of the animal being completely secondary to the amusement of onlookers. According to the AP, the zoo plans to end the spectacle by placing more volunteers around Tori’s enclosure and setting up a mesh screen to keep lit butts out of Tori’s reach.

That measure is only temporary, as zoo keepers will soon move Tori and her mate onto an island preserve far removed from nicotine and human enablers.

However, just what the zoo has been doing for the past ten years is still unclear. Perhaps the novelty of a smoking ape and the crowd she attracted was enough to make the park’s management look the other way. Or, worse yet, perhaps they didn’t care at all. Either way, something is very wrong at this zoo.

Sadly, this kind of mismanagement seems to be common in Indonesian animal parks. In their report, the AP mentions a dead giraffe at the Surabaya Zoo which had a 40-pound ball of plastic in its stomach. Apparently, this was the result of eating trash that had been dropped in its enclosure. Sounds familiar.

Hopefully, the actions taken by the Satwa Taru Jurug zoo will be enough to get Tori back on the straight and narrow. However, it’s probably safe to assume that she is addicted to nicotine at this point. Breaking that addiction will no doubt be a difficult, if not impossible, task. This video, for instance, shows that Tori has even taught herself to chain smoke.

Good luck, Tori. You’ve got a long road ahead of you. And you don’t even know it yet.