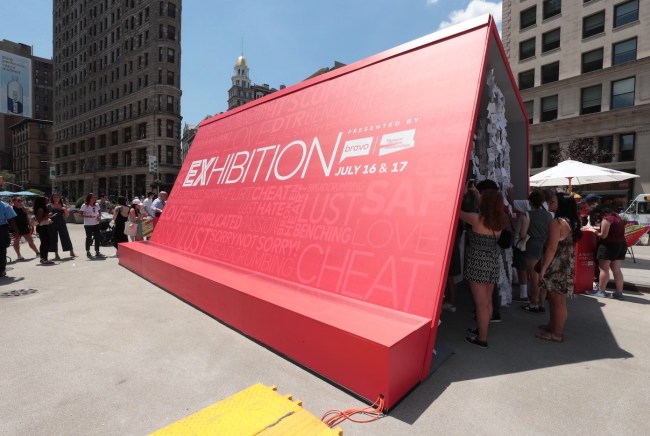 How does one curate something as personal and painful as a heartbreak to the public? It’s a tricky thing, but The Museum of Broken Relationships has drawn many strangers to share their emotional stories and drawn others to these individual stories. Last Sunday, I got to see this museum myself for the first time.

To celebrate the premiere of Bravo’s new docu-series A Night With My Ex which aired Tuesday night, the network brought The Museum of Broken Relationships to New York City. The exhibit, for those unfamiliar, began in Zagreb, Croatia with founders Olinka Vištica and Dražen Grubišić, a former couple. It displays objects that were significant in now-broken relationships, from engagement rings to quirky items to clothing, all accompanied with an anonymous explanation about the relationship and the object’s meaning.

It was a great match, as A Night With My Ex does something similar to the museum, minus the element of anonymity. It draws an audience to empathize and be curious about the stories of strangers and their relationships. The NYC exhibit included objects from some Bravo stars and the show, like a razor from LGBT activist and Youtuber Shannon Beveride: a man’s razor that read, “[My male ex] taught me that men’s razors are almost always superior to women’s razors…However I quickly learned that I preferred women’s legs over men’s. Whoops!” Other objects, ones from those who were more hurt by the end of their relationships (one box of Rice-a-Roni could’ve made me cry) all speak to different stages of relationships and different levels of intimacy.

There were also papers and a printing feature that let visitors leave their own messages, which ranged from heartfelt confessions to, well, this. 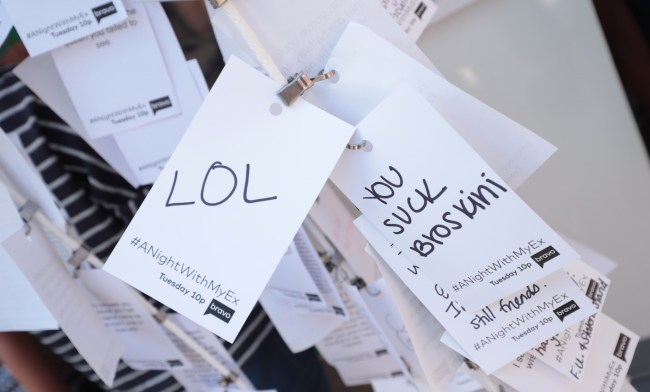 I spoke to Olinka Vištica briefly at the event about why the museum has such strong resonance and why it draws the audience it does. “All these stories are written with great honesty and I think people can be very courageous,” says Vištica, “They speak the universal language, the language of love and lost and it’s a topic which is very democratic. We can all relate to that. And the moment you relate to the person it starts to be as if you were confiding, and you start to think about yourself.

“That’s the wish—to kind of get over it and let go, but at the same time keep the memory of it alive in a very creative way so it’s not there anymore with you. It becomes public and it’s shared with the world.”

When I asked the curator about the exhibit, and how I had read about people experiencing it in all kinds of ways she told me about the responsibility she and Grubišić feel towards both the stories and the visitors. “We try not to abuse the emotions,” she explains, “we really want to exhibit them with dignity in the public space and try to leave people through different states. I mean we could have created a display where everyone would come out sobbing but I think that’s not the point.”

The balance of funny and tragic is very intentional, to capture the many different ways a relationship can be broken. “Our idea is to create this feeling of, ‘Thank god I’m alive and all this can happen!'” she says, “So we curate so start with lighter stories and there are some really heartbreaking, moving stories but then we finish again with a lighter tone because I think that’s life. You have to accept it and go on.” 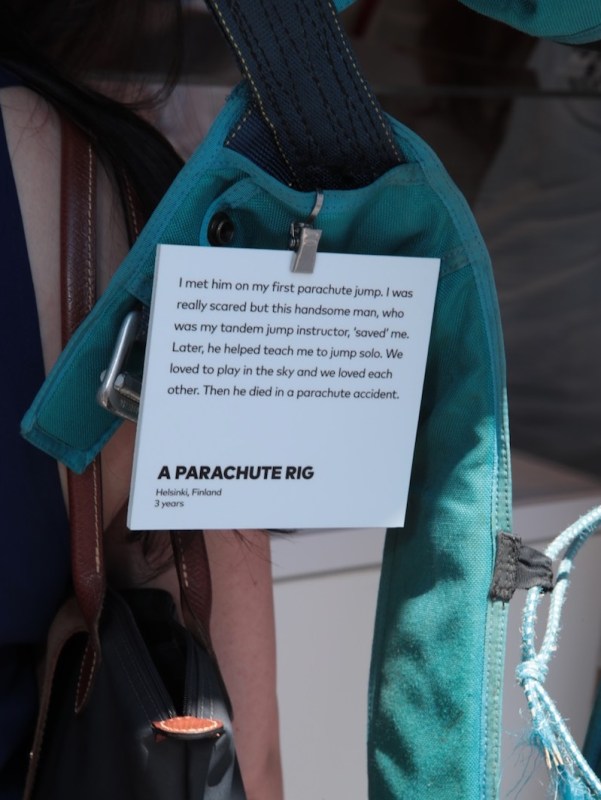 “It’s very individual,” Vištica explains, “it depends on what state of mind and heart you are in. So if you are freshly broken up, you can find maybe a consolation here and see that you are not alone. Usually in these experiences we feel totally abandoned and alone and this can give you comfort.” She recounts a visitor in Zagreb who felt better after coming in miserable, and couples who “you can almost notice how they hold their hands tighter together. “We just want to follow the tide and whatever people send to us, we try to make a bigger picture, a story about love in the last hundred years.”

“Our role as curators was to curate this display—this roller coaster of different emotions, different cultures, different people so you can kind of experience it yourself and enjoy life and say to yourself,  ‘no matter if things are over, things haven’t ended.’ Our human life is so tragic in itself, but it’s not an obstacle for us to be enjoying all the things that can happen.”

You can check out all kind of awkward conversations and emotional conversations on Bravo’s A Night With My Ex and follow the Museum of Broken Relationships which has locations in Zagreb and L.A. and tours here.

A Night With My Exart installationBravoDatingmuseumsrelationships