The Old Reader Will Stay Open Thanks To Unidentified Benefactor 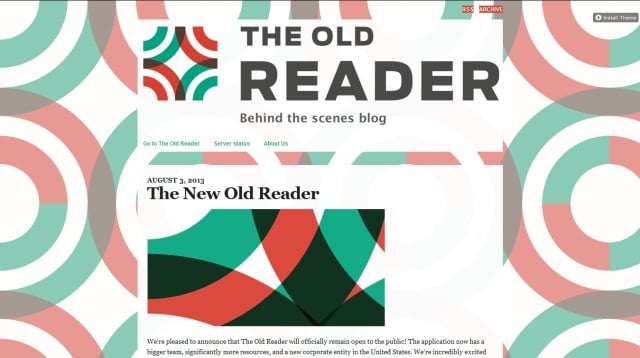 RSS users who switched from the deceased Google Reader to The Old Reader had reason to be worried. The Old Reader threatened to shut out newer users or close altogether. However, it’s just been announced that the service will remain open and free to the public thanks to unspecified outside help. Sounds like something Bruce Wayne would do.

A blog post announced that, “The Old Reader is going to retain all of its functionality and remain open to the public,” and that, “the application now has a bigger team, significantly more resources, and a new corporate entity in the United States.” The blog post was by someone named Ben Wolf, who described himself and whoever he’s representing as “big fans and users” of The Old Reader.

The Old Reader will undergo some downtime as it upgrades its hosting to support a larger number of users. Wolf also says that the RSS reader’s developers Elena Bulygina and Dmitry Krasnoukhov will remain there, but a new team “will be managing the project and adding to the engineering, communications, and system administration functions.”

The post doesn’t identify exactly who Wolf represents or what kind of deal was made with The Old Reader, save that The Old Reader will have a new corporate entity in the United States and be hosted in the US as well — Bulygina and Krasnoukhov are based in the Ukraine. However, a Ben Wolf is the founder and chief architect of Levee Labs, a Wisconsin-based cloud and data applications company incorporated in 2012.

Take a look at their usually-sporadic Twitter from a few days ago:

We’ve been busy and have some really exciting announcements coming in the near future. Two new products on the horizon!

It seems possible that this is the savior of The Old Reader. But whoever is responsible, the refugees from Google Reader are grateful that the RSS feed experience they’re used to lives on.

(The Old Reader blog via Slashdot)