Google’s Killing Reader Because It Wants You to Use Google+

Silly Internet, don't you know that Google is right about everything? 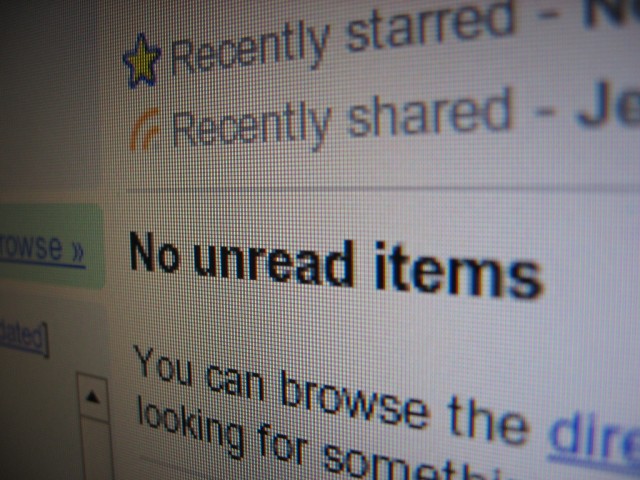 Google’s RSS Reader is finally getting the ax next month on July 1st, and few folks in the blogging community are happy about it. Though we’ve all had time to scrounge together a suitable replacement — my pick is The Old Reader, but Feedly’s also pretty solid — we all still have a lot of questions about the decision. Specifically, “Why?” and as a follow up, “How could you?” While it’s true that the number of users signing up for Google Reader has been slowly declining of late, Google’s offered up another reason for canceling the service: Because they really, really want you to start using Google+ instead. God, Google, get over it already.

According to the higher-ups at Google, we’ve begun to consume news differently on the Internet than we did when their Reader was launched in 2005. Rather than passively view a long list of aggregated links, we tend to want to engage with it interactively on a constant basis. That’s the theory, anyway.

“Users with smartphones and tablets are consuming news in bits and bites throughout the course of the day,” says Richard Gringas, Google’s Senior Director of  News and Social Products. “[It’s] replacing the old standard behaviors of news consumption over breakfast along with a leisurely read at the end of the day.”

Google’s suggested replacements don’t exactly sound all that stellar. A combination of Google Now, which sends breaking news directly to your mobile phone (assuming you don’t have an Android device that doesn’t support it), and Google+, the social media site launched in 2011 as a way to compete with Facebook. The added bonus for Google is that with these two programs, you won’t be leaving the site to go check out headlines anywhere you would have simply subscribed to with a RSS Feeder. Again, that’s the theory.

There’s no telling now whether the Reader-shaped hole in our hearts will make it easier for these other Google products to swoop in and take over our brains. I suspect not, because I don’t think I’ve been on Google+ since I was invited to join in the first place. They can keep pushing it on me all they want, though, because everybody knows it’s going to go the way of Google Wave sooner rather than later. Probably sooner. Hopefully sooner.

(via Wired, image via Trevor Manteranch)