Hell is Other People: Anti-Social App Helps You Avoid Running Into Your Friends

If you could figure out where all your friends were at any given time, you'd probably want to avoid them. 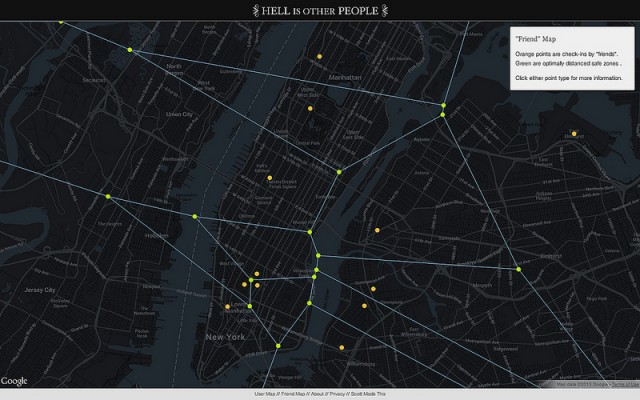 Ever had a day where you just don’t want to have to deal with other people? Ever taken a different path than usual because there’s someone you really don’t want to run into on the way? Good news, an app developer has leveraged social media to direct you along routes where your friends aren’t. The app, called Hell Is Other People, is an experiment in anti-social media. It monitors your friends’ check-ins on Foursquare to figure out where they might be and then creates a map with “optimally distanced safe zones” to decrease the chances that you might cross their paths.

Its developer, Scott Garner, navigated around New York City for hours without having to worry about getting drawn into an awkward encounter with someone he knew on the way. Garner sees the project as a satire of social media and a commentary on his own disdain for it. “I actually really hate social media,” said Garner. “I had to sign up for a social media site and talk to people to get them to be my friends on that site so that I could avoid them.”

Hell Is Other People isn’t perfect, however. Operating based on Foursquare check-ins means that it only works if the people you’re trying to avoid are frequent Foursquare users — admittedly, people who have the need to check in on Foursquare everywhere they go are probably the people you most want to avoid.

Garner found himself flying blind when friends failed to mark their positions frequently enough. Amusingly, his system for staying independent of other people is entirely dependent on those other people to work properly. “I hate doing things that depend on other people, because they are so unpredictable and unreliable,” Garner said.

(Hell Is Other People via The Verge)