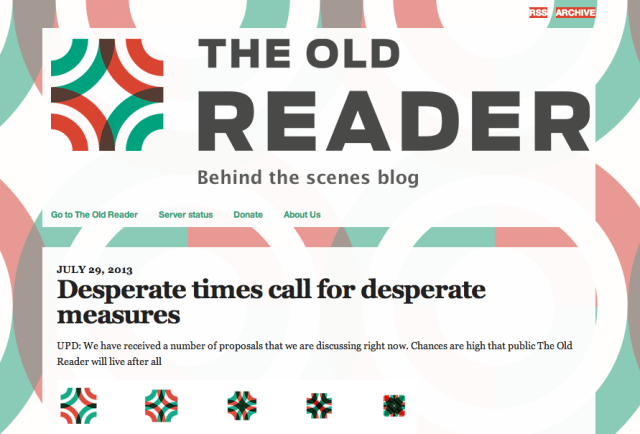 Since the death of Google Reader on July 1st this year, users have been scrambling to find a replacement. The Old Reader seemed like a great alternative — I was using it myself — right up until they announced yesterday that due to the influx of new users, they may have to shut their doors to everyone who signed up after March 13th.

Why is the cutoff March 13th? Because that’s the day before Google announced they’d be killing their Reader and everybody started piling up at the metaphorical Old Reader entrance — which, yeah, includes me. All users who signed up before that date will be allowed into the private Old Reader, and all those who didn’t could get shown the door. That is, unless you’ve donated towards the site in the past, in which case they’ll happily accept you back into the fold (although those who gave bitcoins will have to get in touch with them directly to let them know).

The Old Reader is a particularly interesting RSS reader because it’s essentially a direct replacement from the old Google Reader, which is how it got its name in the first place. In a post on their blog, founders Elena Bulygina and Dmitry Krasnoukhov cited the following reasons for closing up shop:

Since we launched first public version almost a year ago up until March 2013 we have been working on The Old Reader in “normal” mode. In March things became “nightmare”, but we kept working hard and got things done. First, we were out of evenings, then out of weekends and holidays, and then The Old Reader was the only thing left besides our jobs. Last week difficulty level was changed to “hell” in every possible aspect we could imagine, we have been sleep deprived for 10 days and this impacts us way too much. We have to look back.

The truth is, during last 5 months we have had no work life balance at all. The “life” variable was out of equation: you can limit hours, make up rules on time management, but this isn’t going to work if you’re running a project for hundreds of thousands of people. Let me tell you why: it tears us to bits if something is not working right, and we are doing everything we can to fix that. We can’t ignore an error message, a broken RAID array, or unanswered email. I personally spent my own first wedding anniversary fixing the migration last Sunday. Talk about “laid back” attitude now. And I won’t even start describing enormous sentimental attachment to The Old Reader that we have.

Well, when you put it that way, we can’t really blame them.

Of course, this all might be moot anyway, as the post has been updated recently to say that they’ve received a number of proposals and “Chances are high that public The Old Reader will live after all.” That would be nice, as I’d like to be allowed to keep using it. Nothing’s set in stone, however, especially on the Internet… so we’ll see, I guess.

While we wait for more news on the future of The Old Reader, you should probably get all the backup OPML files for your feed just in case. You can do that by clicking the button at the bottom of your User settings page.

(The Old Reader Blog via TNW)