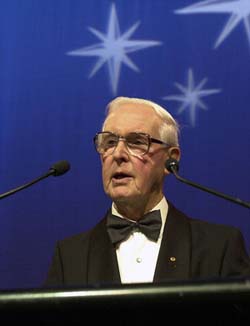 Don’t panic, but in 100 years we’re all going to die. Renowned Australian scientist and professor Frank Fenner, who helped eliminate smallpox, one of humanity’s greatest historical foes, thinks the end is nigh for the human race.

Fenner spoke with The Australian, and his message was about as grim as can be without him donning a cloak and wielding a scythe (which we actually can’t confirm he wasn’t doing):

“We’re going to become extinct,” the eminent scientist says. “Whatever we do now is too late.”

“Homo sapiens will become extinct, perhaps within 100 years,” he says. “A lot of other animals will, too. It’s an irreversible situation. I think it’s too late. I try not to express that because people are trying to do something, but they keep putting it off.

“Mitigation would slow things down a bit, but there are too many people here already.”

Great news from down under.

Overpopulation, global warming, and overconsumption are all big worries, to be sure. But a century seems like an awfully short time for us to literally all die out. Then again, with over 7 billion of us expected to be sustaining ourselves on the same planet by the end of next year, it might not be as unreasonable as it sounds. Below is a chart showing global population through history:

Obviously things can’t continue at the current rate for very long. Hopefully, though, it’s not too late for humanity to survive. Worst comes to worst we can all just migrate into space.

(Via The Australian and PhysOrg)