What Is Okoye’s Mysterious Role in Avengers: Endgame?

More Danai, please and thank you. 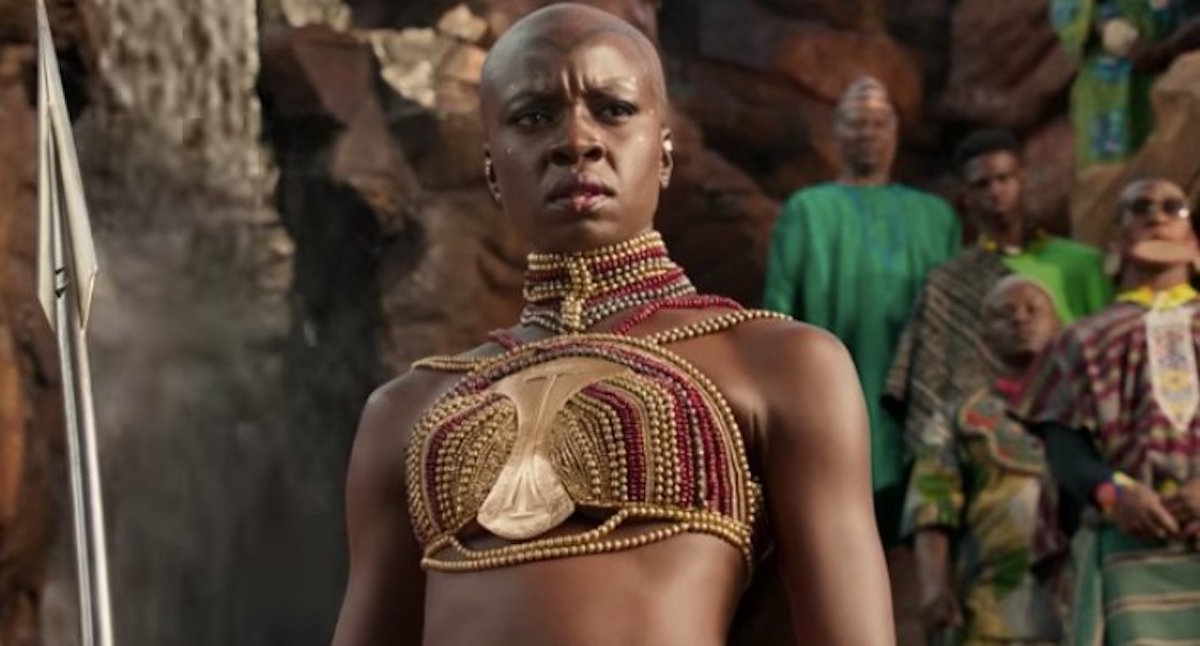 As everything went to hell and people got Snaptured away, one of the survivors of Avengers: Infinity War was Okoye, Wakandan general and leader of the Dora Milaje. Danai Gurira, who was a scene stealer in Black Panther, managed to make Okoye’s limited Infinity War screen time memorable, and fans wondered what would happen next with her character, since she survived Thanos’s snap.

We now have confirmation that Okoye will be appearing in Avengers: Endgame, since she is featured on the poster. Unfortunately, her name is not featured in the top billing, which seems weird and hopefully doesn’t mean that she’ll have a smaller role in the film. After all, she and everyone else in the movie scored top billing for Infinity War, and it seems weird to feature her on the poster and not have her name listed there. Marvel, do a little better.

Here’s your first look at the new poster for Marvel Studios’ #AvengersEndgame. See it in theaters April 26. pic.twitter.com/pNXSy0x8lI

So now that we know she’s playing an integral enough role to be on the poster for the film, the question remains: What will that role be?

Joe Russo did not flat out confirm that Okoye would return prior to the poster being released, but said in an interview with Entertainment Tonight, “Danai did, I thought, amazing work in Infinity War, and I think that that character is very powerful and super compelling, and I think there’s a lot of places to go with that character. Her goal in life, her mission in life is protect the king, and watching him evaporate in front of her, and there is nothing she can do about it, is really taking that source of pride from her and that duty. It challenges her in the most painful way possible.”

This is going to be a difficult time for Okoye especially. Not only has she lost T’Challa in a way in which she could not do anything, but Wakanda itself was also devastated. Gurira is a talented actress who made the brief glimpses of Okoye’s grief in Infinity War hurt. She will truly deliver if given the time to fully react to the loss.

We know Shuri is missing based on the first trailer for the film; will Okoye and a hopefully still-unsnapped Queen Ramonda lead the Wakandan survivors? Or will Okoye play a far larger role in terms of the Avengers getting their avenging going? She could also be leading a charge against Thanos with some of the characters who aren’t off, possibly, in the Quantum Realm.

We know Valkyrie will be around, based on spoilers and leaks. Could we see a team-up with two of the most badass heroines in the universe? Since both of them might not be going into the Quantum Realm, they could be guarding Earth against any retaliation from Thanos.

Of course, there’s the possibility of another awesome team-up.

Pom Klementieff, who plays Mantis, also implied that she might share a scene with Guriria and another badass heroine. When asked about #MeToo and #TimesUp in an interview with Paper Magazine, she said, “I remember Brie Larson coming to me and Danai Gurira on the set of The Avengers, and she told me about the [Time’s Up] letter to sign and I found it really amazing to have all these women — and men too — together in fighting for a better world.”

This seems to imply that Mantis, who got snapped away, will appear in some capacity and will fight alongside Carol and Okoye, which … yeah, I’m here for that. More of the Marvel women teaming up to kick cosmic ass, please and thank you.

It could also be that Okoye is traveling via the Quantum Realm and we just haven’t seen anything about it yet. She has a personal stake in seeing Thanos pay for what he did to Wakanda and T’Challa. She might choose to defend Wakanda on a universal scale and join the Avengers, rather than stay on Earth. This could lead to her teaming up with Carol and, in a past timeline, Mantis.

Regardless of what her role is, I do have one request: Do not kill her off. Kill off Steve, or Tony, but do not take Okoye away after we’ve only had a couple films with her. That’s not negotiable.

What do you think Okoye’s role will be in Avengers: Endgame? Are you made her name isn’t on the poster?