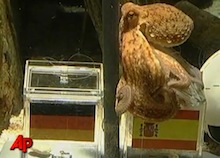 Paul, the “psychic” octopus who correctly predicted the outcomes of all seven of Germany’s World Cup matches this year and capped it off by correctly predicting that Spain would defeat the Netherlands to win the final, has died of natural causes. He was two and a half years old, which is supposedly a decent lifespan for an octopus.

Paul seemed to be in good shape when he was checked late Monday, but he did not make it through the night. He died of natural causes, [spokeswoman Ariane] Vieregge added.

The invertebrate was stepping “back from the official oracle business,” Tanja Munzig, a spokeswoman for the Sea Life aquarium in Oberhausen, told AP Television News at the time.

“He won’t give any more oracle predictions – either in football, nor in politics, lifestyle or economy,” she said. “Paul will get back to his former job, namely making children laugh.”