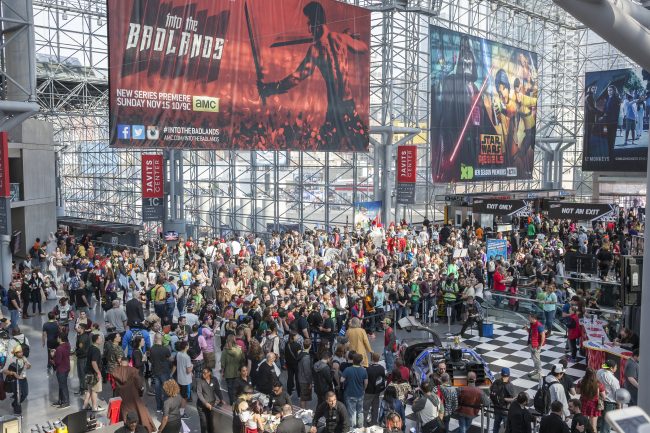 NYCC has announced that three and four-day passes are henceforth eliminated, in a break from their longstanding practice. Does this help in the quest to get tickets or hurt?

The con-gods of NYCC made known their new edict this morning. In an explanatory post, they wrote:

We’re going to be real with you, this is a very bittersweet announcement—we are eliminating 3-Day and 4-Day tickets. We will only be selling single day Thursday, Friday, Saturday, Sunday, and Sunday Kids tickets to NYCC 2017.

You may or may not know that the Javits Center is going to be under construction. This means we’ll be working with some space limitations and we want to make sure as many people have the opportunity to buy a ticket and come to the show as possible. Selling only single day tickets will give more fans the chance to buy a ticket for at least a day to experience the fun of NYCC.

This would appear to make sense—if it weren’t for the fact that trying to get any tickets for the popular con is, to put it mildly, a clusterfuck of epic proportions. Last year there was widespread fury on social media when the ticket-buying system seemed to crash, freeze, and burn in equal measures. Friends of mine who had prepared all day to buy tickets were locked out of the process.

I can imagine the single-day tickets policy presenting further problems. Many people travel to the con and because it’s based in New York City, they’re already dishing out a big chunk of change for other necessities like food and lodging. Introducing the uncertainty of which days you can attend will not be fun. What if you’ve planned for three days, but only get a Friday and Sunday ticket? Additionally, NYCC can be slow about releasing their guest attendees and scheduled panels, so there could be complications and disappointment in choosing a single-day ticket if it turns out the panel you really want is on another day.

NYCC’s post claims they’re working on improving the dread ticket-buying process. Writing “we hear you,” they announced that this year, tickets will go on sale on the weekend, ostensibly to give people more time and access to buy. This is good in theory, but also will likely increase the already overwhelming demand online, plus the added headache that you’ll now have to fight for multiple ticket days instead of a pass. At least they acknowledge the problem. Sort of. “And yes, we hear that you don’t like the virtual queue, but unfortunately it isn’t going away.”

I’ve been extremely lucky in covering NYCC for years with a press pass. I’ve watched it grow from a relatively small production to a blockbuster that encompasses multiple venues and commands appearances by big stars. It’s exciting to see so much enthusiasm from fans and expansion from NYCC, and I look forward to it every year. But I know many people who have given up on even trying to get a ticket because the process is fraught, time-consuming, and stressful. While I’m crossing fingers that the measures being introduced allow more people access to the con, I’m not holding my breath.