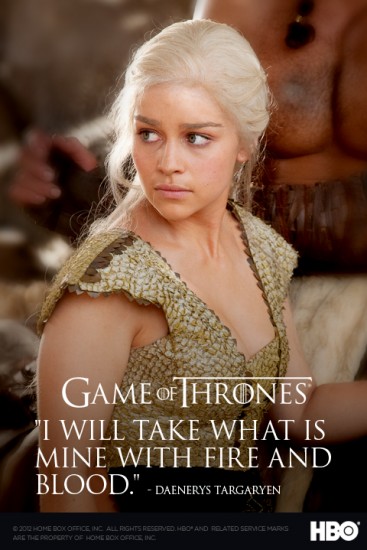 See that face Daenerys is making? That’s the face I’m making in the general direction of the New York Times today. Why? Because yet again they’ve trolled us and assigned someone who apparently hates fantasy fiction to review HBO’s Game of Thrones Season 2. That makes sense, right?

They’ve been published since 1851 but miraculously, the NY Times still doesn’t seem to “get” fantasy stories. That, or they just really wanted a lot of hits and decided they’d poke the collective geek hornets nest again.

You may remember the “review” writer Ginia Bellafante posted on the NY Times last year telling everyone how horrible Game of Thrones was (while leaving out actual critical information about plot, characters, etc), that it wasn’t for women at all, and basically revealing she didn’t like this kind of entertainment anyway.

The true perversion, though, is the sense you get that all of this illicitness has been tossed in as a little something for the ladies, out of a justifiable fear, perhaps, that no woman alive would watch otherwise. While I do not doubt that there are women in the world who read books like Mr. Martin’s, I can honestly say that I have never met a single woman who has stood up in indignation at her book club and refused to read the latest from Lorrie Moore unless everyone agreed to “The Hobbit” first. “Game of Thrones” is boy fiction patronizingly turned out to reach the population’s other half.

Yeah, that caused a bit of stir within the community. Not just from scores of female George R.R. Martin fans, but from women fantasy readers in general. We hoped that next time, they’d pass over Bellafante, and go with someone who could provide a clearer critical eye of the series. They didn’t.

In his review of the first four episodes of the new season, writer Neil Genzlinger makes sweeping generalizations about Game of Thrones viewers and goes on to straight insult us.

What “Game of Thrones” needs if it is to expand its fan base beyond Dungeons & Dragons types is what most of the United States didn’t get this year: a hard winter. Life in this particular fantasy land consists of seasons of indeterminate length, and since the series began there have been references to an impending winter of fearsome power.

Sigh. As if the Dungeones & Dragons players guide is actually a rule book on how to enjoy all other forms of fantasy. Not to mention the fact that if it were only D&D players watching the show, it wouldn’t have gotten a second season. Genzlinger is under the bizarre assumption that the Emmy Award-winning HBO series needs more viewers to stay on television. I laugh in your general direction, sir.

That wasn’t the first time the NY Times mentioned D&D either. Bellafante also lumped the two together.

If you are not averse to the Dungeons & Dragons aesthetic, the series might be worth the effort. If you are nearly anyone else, you will hunger for HBO to get back to the business of languages for which we already have a dictionary.

Genzlinger goes on to dissuade viewers to watch if they haven’t seen the first season, or if they aren’t capable of remembering a large cast of characters.

The character board for the series on HBO’s Web site has 49 head shots on it. Thinking of jumping into the new season without having seen the first? Don’t even try; your brain doesn’t have that many neurons.

Sure, jumping in at Season 2 for a show like Game of Thrones may not be the best idea but it’s not difficult to view Season 1 if you were interested enough to watch. If you’re an HBO subscriber you can view it on their HBO Go program. And it’s out on DVD and blu-ray, too.

It’s an odd stance to take. You’re reviewing the first few episodes of a second season, wouldn’t you…I don’t know…tell your readers whether viewers of the first season will like or not like?  That’s usually how reviews work. If I’m reading one for a show I already love, I want to know if the same pace, action, and storytelling are kept up or if the quality has gone down.

Genzlinger does throw us a small bone however.

Some people love this kind of stuff, of course, and presumably those addicted to the George R. R. Martin books on which the series is based will immerse themselves in Season 2, just as they did in Season 1. Will anyone else? You have to have a fair amount of free time on your hands to stick with “Game of Thrones,” and a fairly low reward threshold. If decapitations and regular helpings of bare breasts and buttocks are all you require of your television, step right up.

What Genzlinger never explains is why regular viewers will be immersed in Season 2 however, the review is resoundingly negative. However, I have to say the last straw for me was when the author goes on to tell us we may possibly be sick for our enjoyment of the series.

You wince every time Joffrey, a sadist, comes on the screen, and not in an “Ooh, I wonder what nasty thing he’ll do next” sort of way. If you find yourself looking forward to Joffrey’s scenes, there’s something wrong with you.

No, actually, that is the way we all see it. We love to hate Joffrey. Just like viewers have loved to hate characters like Giaus Baltar, Ben Linus, or Lori Grimes (ok, maybe we just straight up hate her). Genzlinger hits at least one nail on the head in his review. He called Joffrey, “the bile duct of the show.”

You don’t have to assign someone who is a huge Game of Thrones fan to review the fantasy television show but it would help if they were inclined to watch the show in the first place having already been a fan of other fantasy works. For instance, though I enjoyed them as a child, I’m not going to write a review for a Transformers film because I’m predisposed not to like it. Conversely, I would be open to writing a review on something like Warehouse 13, a show I’ve never watched, because I think it looks interesting and I enjoy sci-fi. And my editor would know me well enough to know the difference. The NY Times, it seems, does not.

We’ll have our own review/recap up of the first episode tomorrow and you know what? We’ll make judgements about the actual show, not the viewers.

(via Geek With Curves)