So… Fantasy Novels Add Sex To Attract Women and Apparently That’s A “Perversion”? 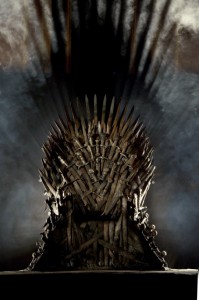 The true perversion, though, is the sense you get that all of this illicitness has been tossed in as a little something for the ladies, out of a justifiable fear, perhaps, that no woman alive would watch otherwise. While I do not doubt that there are women in the world who read books like Mr. Martin’s, I can honestly say that I have never met a single woman who has stood up in indignation at her book club and refused to read the latest from Lorrie Moore unless everyone agreed to “The Hobbit” first. “Game of Thrones” is boy fiction patronizingly turned out to reach the population’s other half.

— Ginia Bellafante‘s review of Game of Thrones for The New York Times.

Ginia Bellafante is not a fan, and she should not be excoriated for not liking the same things that we like. There are plenty of people out there for whom a book that comes with a map, three family trees, and a glossary in the back is not their cup of tea. And there’s nothing wrong with that. After all, some of those people are still fans of Doctor Who, or Pokémon, or Transmetropolitan and there’s no reason why you should be kicked out of the geek community for not being able to get through The Lord of the Rings.

And those other people, the ones who wouldn’t know Star Wars from Star Trek, they need someone to write a review for them too. So Bellafante gives a bit of lip service to fantasy fans (“If you are not averse to the Dungeons & Dragons aesthetic, the series might be worth the effort.”) and then heaps (okay, maybe she molehills) scorn on the idea of creating a fictional language (hey, Avatar grossed $2 billion, you know).

Now lets be clear: there are things to talk about when you look at the intersection between feminist ideas and the genre of high fantasy. The women of note in the eons of Middle Earth history, the seminal work of the genre, can be counted on one hand. The land of Narnia also has some questionable “war is ugly when women become involved” motifs, and even Wikipedia admits that when you look at the classics of high-fantasy, you’re looking at a long precedence of male heroes with women as side characters. I don’t say this to condemn high fantasy or suggest that it shouldn’t be read, loved, or written; but just to point out that there’s a lot of interesting discussion to be had there and it’s not hard to see why a casual dip into the genre would pull up only male oriented stories.

(Anybody else find it very difficult to explain why the Kushiel books are so good without making them sound like airport bookstore bodice rippers?)

So I’m not even going to touch on the assumption here that women don’t enjoy high fantasy when it’s actually one of the great bastions of women authors from Anne Bishop to Susan Cooper to Marion Zimmer Bradley. But the assumption that A) the addition of sex to fantasy was something done during the adaptation process and was not originally present in the novels, B) that the sexing up of a book during adaptation was done for the benefit of (straight) women, and C) that that is a disturbing thing is, not to put a fine point on it, really freakin’ weird.

Okay, we can forgive A if you are not familiar with the broad spectrum of fantasy novels, as one might expect when you’re namedropping The Hobbit, a children’s story, as proposed book club fare.

But B and C? If sex is being tossed in to attract the (assumed universal) straight woman then that is an incredibly rare occurrence in today’s media and should be celebrated as against the norm! When I picture a sexy adaptation of a non-sexed-up property, it’s usually something like this, or this. It’s done for the befit of those who are attracted to women (assumed the universally straight male).

Sex is usually something that’s tossed in to attract a young male audience, and it usually makes the work look cheap in comparison. If the industry of cinema is going to try to attract me to a concept or pitch by putting some classy, unusual, girl oriented sex in it, I say it can’t happen fast enough, because clearly asking anything that’s trying for a mainstream audience to publicize itself without sex is far too much.

It just might be difficult for me to watch because I don’t have HBO. Or… cable. Or a television service of any kind other than Netflix.

George R.R. Martin himself has responded to the review, if only to assert some reservations about responding to reviews at all, and simply to say:

(1) if I am writing “boy fiction,” who are all those boys with breasts who keep turning up by the hundreds at my signings and readings?
and
(2) thank you, geek girls! I love you all.

Thanks Mr. Martin. I’m seriously considering starting your series even though it’s not finished yet, which is usually my requirement for fantasy more than three books long.

The Stinger: the lesser perversion (as opposed to the “true perversion” above) to sex being used to attract female viewers is, according to Bellafante, brother-sister incest. #poorchoiceofwords

(The New York Times via about a billion different people.)