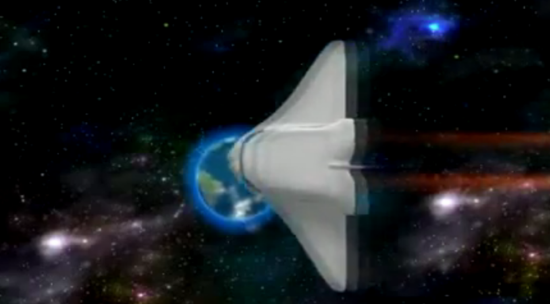 As North Korea gets ready to perform a nuclear test, they’re also stepping up their propaganda efforts, or at least they’re trying to do so. A video released by the country’s official website on Saturday shows a dream sequence of a unified Korea, spaceflight, and an unspecified American city being bombarded with missiles. The whole thing would be more frightening if the CGI graphics weren’t at best on par with Home Improvement scene transitions and at worst like something out of 1980s Doctor Who.

The video starts as a young man drifts off to sleep as a soft dentist-office-waiting-room piano version of “We Are the World” plays, and it just gets weirder from there. Take a look:

The Telegraph reports that the text over the images of the burning American city read “Somewhere in the United States, black clouds of smoke are billowing,” and, “It seems that the nest of wickedness is ablaze with the fire started by itself.”

At the end, the guy in the video comes to the conclusion that his poorly-rendered dream will “surely come true.” That would obviously be in spite of “all kinds of attempts by imperialists to isolate and crush us… never will anyone be able to stop the people marching toward a final victory.”

North Korea, however proud you are of your new rockets — that’s how ashamed you should be of this terrible video. It’s incredibly hard to take you seriously if you this is the best you can do. Put a little money into your graphics department. The best looking part of the video is the scene where the American city is on fire, and that was stolen from Modern Warfare 3.

UPDATE: YouTube has removed the video due to a complaint by Activision over its use of the Modern Warfare 3 footage. The video embedded here is now linked to The Telegraph’s site, which reposted the video.

(via The Telegraph, TechCrunch)