Just not worth it. 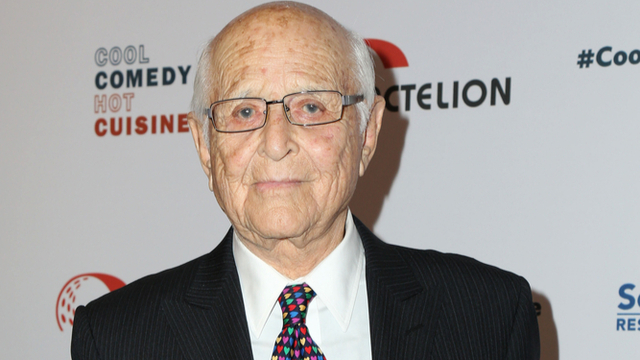 Norman Lear is a TV legend. He’s the executive producer behind a number of shows that helped shape television as we know it: All in the Family, Good Times, Sanford & Son, and tons more. So it’s no surprise that he was chosen for a place in this year’s upcoming Kennedy Center Honors–a sort of celebration of lifetime achievements in entertainment. He was chosen for this year’s awards alongside Gloria Estefan, LL Cool J, Lionel Richie, and theatre legend Carmen de Lavallade.

The Kennedy Center Honors are a big deal, and a major recognition to those who have shaped the cultural landscape. Those who have received the honor range from Meryl Streep to Sting to Mikhail Baryshnikov to Oprah to Billy Wilder to–you get it–everyone.

But for Norman Lear, the honor is being overshadowed by the person bestowing it. Because while the president doesn’t choose the honorees, he does, typically host the event. And being in the same room as Trump, talking to him, receiving this award from him–it’s just not worth it. Lear has never tried to hide his feelings on this administration.

Remind you of anyone? pic.twitter.com/2Berc39gXD

To be clear, Lear is still accepting the honor. He’s just not attending the event traditionally hosted by the president.

I could never turn my back on the @kencen. It represents the Arts and Humanities which mean everything to me. Of course, I’m accepting…

…the honors. What I’m not accepting is the @WhiteHouse reception with @realDonaldTrump. https://t.co/yCxS3RxIr7

I do wonder, though, if Trump will keep with the tradition of hosting this event. Since he has been forsaken by the “coastal elites” he’s spent his life and career trying to win over, he has declared them the #1 enemy of freedom and democracy. He notably skipped the White House Correspondents Dinner after being criticized by those “media elites.” He is so regularly criticized by those in the arts (see: any number of recent awards shows), would he really attend an arts event? Or will he choose to fly to Ohio or Florida or wherever he’s still trying to convince the “real” people he cares bout them? (Spoiler: He doesn’t.)

For now, Lear has dedicated his life to the arts, so he would prefer not to receive recognition for that life from someone who is actively trying to destroy it. He told the New York Times, “This is a presidency that has chosen to neglect totally the arts and humanities — deliberately defund them — and that doesn’t rest pleasantly with me.”

When Lear got the call from the president of the Kennedy Center, he had to tell her that, while grateful, he said “I will have to tell you how I feel.”

We can’t know the details of that conversation, but Lear lays out his feelings pretty clearly. “Feelings don’t go away, thoughts and opinions don’t vanish,” he says. “I heard [about the honor] and they understood exactly how I felt.”

It’s important to note that while Lear is the only honoree who has announced his boycott of the reception, he is not the only one who has stated plans to protest. If Trump does decide to follow tradition and attend the event, he will sit with the honorees at that ceremony. And Gloria Estefan is preparing for what it means to accept an award from and share a table with Donald Trump. She says she sees this as “the perfect opportunity to make clear and express” her views.

She says she plans to tell him, “Mr. President, as a proud immigrant of this country, it’s very important for me that you see the wonderful contributions we have made. We have seen a lot of anti-immigrant backlash this year, so for us, it may hold even more beauty than for someone who has lived here all their lives. To get this kind of award is so American.”

Hmm, I think this begs the question: What would you say if you had the opportunity to share a table with Donald Trump? Or would you simply run as far as possible in the opposite direction?