Noelle Stevenson Is Making an Animated She-Ra Series for Netflix

"An epic and timely tale that celebrates female friendship and empowerment." 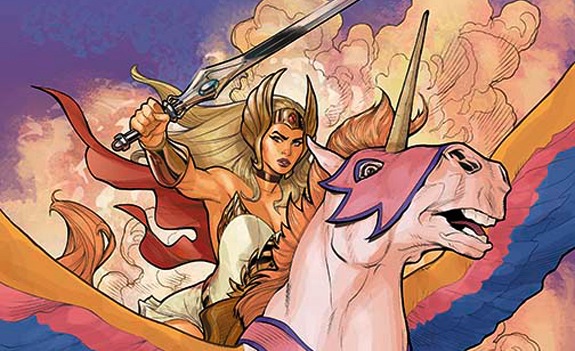 Netflix and Dreamworks Animation announced their new slate of animated shows, and there’s one that has me particularly pumped.

Eisner winner Noelle Stevenson, of Lumberjanes and Nimona fame, will serve as showrunner and executive producer for a reboot of She-Ra, the “trailblazing property [which] originally debuted in 1985 to satisfy demand for a female-led fantasy series.” Netflix and Dreamworks described the show as “a modern take on the ’80s girl power icon for a new generation of young fans” and “an epic and timely tale that celebrates female friendship and empowerment, led by a warrior princess tailor-made for today.”

Both Stevenson and her girlfriend Molly Ostertag tweeted about the show, which Stevenson has been working on for nearly two years.

🌈⚔️✨ I’M SO PROUD OF MY INCREDIBLE GIRLFRIEND! And the star studded crew she’s put together!! This show is going to be amazing and, no lie, has already made me cry a dozen times 🌈⚔️✨ https://t.co/6RXunEt9tb

I’ve been working on this in secret along with some really incredible talent for almost two years now. Stay tuned for more details over the next few months – can’t wait for you to see what we’re doing.

She-Ra: Princess of Power premiered in 1985, as a companion show for the He-Man cartoon. The series centers on Princess Adora, who is the twin sister of Prince Adam/He-Man. When she holds aloft the Sword of Protection and says, “For the honor of Greyskull,” she transforms into the powerful She-Ra and acquires the strength she needs to lead the rebellion against evil Hordak and the Horde.

Stevenson is just such a perfect choice for rebooting this over-the-top series, and I can’t wait to see what she and her team have created. Her delightful graphic novel, Nimona, is also being developed as an animated film over at Fox Animation, intended for a 2020 release date. Lumberjanes, which Stevenson co-created with  Shannon Watters, Grace Ellis, and Brooke A. Allen, has also been in development as a live-action movie since 2015 (though no new details or date have since been released).

She-Ra will premiere on Netflix at some point in 2018.

(Via Variety; image via DC Comics)