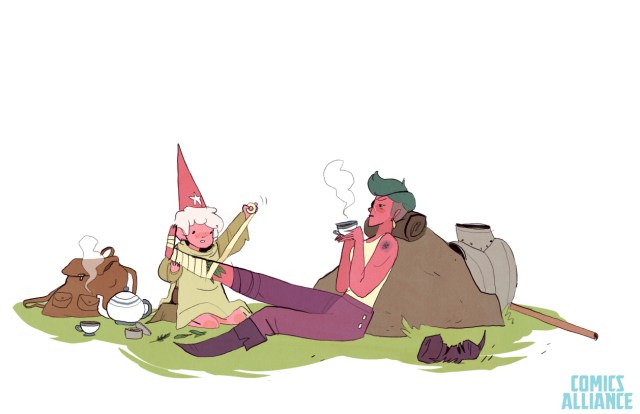 oops this started as a doodle to test my new sketch brush and ended up as a some Wizards in a more detailed style pic.twitter.com/b8n1IqyZXd

In addition to that, she also tweeted clarification on the other wizards:

Zan and Brambles are the other wizard/apprentice pair. She’s a super intense paladin, he is a wee druid child who loves everyone and plants

So, the other characters with whom Hugo and Ivy (and Nightshade) interact, Zan and Brambles, is the other wizard. When I read the synopsis, and I saw that Zan was a paladin, I didn’t think wizard. But…if there’s Hugo, Ivy, Nightshade, Zan, and Brambles…isn’t that FIVE wizards? Then again, with this new context, Nightshade probably doesn’t count. From the description of her…that might not sit with her too well. No matter how many wizards there end up being, I can’t wait for this book!

We were so sad to hear that comics creator, Noelle Stevenson, is leaving Lumberjanes after Issue #17, BUT she’s got a lot going on, so there’s no way she’s leaving the comics/pop culture stage any time soon! Obviously, there’s the Lumberjanes movie, as well as the animated film version of her comic, Nimona. Now, she’s teaming up with writer Todd Casey on a new illustrated fantasy series for Harper Teen called 4 Wizards.

4 Wizards tells the story of an eccentric wizard named Hugo, his sarcastic teen apprentice (who happens to be a medium), Ivy, and her unpredictable alter-ego, Nightshade as they fight oncoming dark forces. Stevenson and Casey recently spoke with Comics Alliance about their new project, and Stevenson provided them with some of her first character sketches, which we’re sharing here!

Stevenson and Casey met when they were both working on the Disney animated series, Wander Over Yonder, which is when they developed the idea for 4 Wizards.

On how the characters came to be:

Noelle Stevenson: The original inspiration were these little wizard doodles I was doing at the time, and Todd saw them and said something like, “I bet I could write a whole pitch around those.” So we pretty much came up with the characters to fit these drawings, based around the idea of mismatched wizard/apprentice pairs. I think our earliest idea for Hugo and Ivy was, “what if Aubrey Plaza interned for Gandalf?”

Todd Casey: Part of it was the characters influencing each other as they emerged. We wanted them to have diverse personalities that could rub against one another to make some fire. And, with anything you write, parts of yourself go in and become exaggerated. We thought as much about how they relate to each other as we did about who they are. On the long-term plan for 4 Wizards:

Stevenson: There is something of a loosely-sketched long-term plan, but I think most of all we’re both just interested in getting to play in this world. For me personally, my first comic project Nimona had this very definite ending, and I wanted something that gave me more time to spend with the characters and let them grow over a longer time frame.

Casey: The first book is tightly focused on the core group but, as we go, we’re hoping to introduce a lot of new faces — some of whom Noelle has already drawn. “We’ll save that for book two” has become a familiar refrain in our story breaks.

Sounds intriguing! After all, the title is 4 Wizards, and yet – from the description – it seems to be about one wizard, his apprentice, and her alter-ego, which is pretty much only three wizards, if you think about it. WHO’S THE FOURTH WIZARD?! For more of the interview, check out the link above! Meanwhile, the first volume of 4 Wizards is set to be published by Harper Teen in 2017.