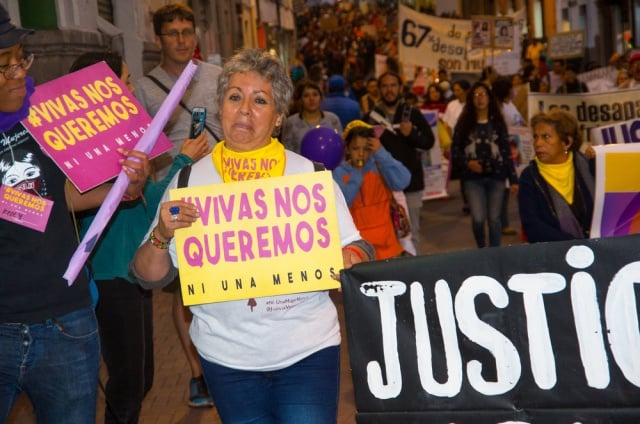 Femicide is the gender-based killing of women because they are women and the leading cause of premature death for women globally. Buzzfeed news has reported on the state of femicide in Argentina, and it is dire. The country has one the highest rates of Femicide, to the point where it is considered a national emergency. Their Supreme Court’s Women’s Office, which has the only official national statistics on femicides as of now, has reported that “there were 254 such killings last year, up from 235 in 2015, and 225 in 2014.” This year, activists have already recorded 133 femicides between January and May.

One of the most recent victims was activist Micaela García, who was connected to the movement #NiUnaMenos or #NotOneLess, a feminist movement trying to change the hyper-masculine culture and get justice for female victims of rape and domestic abuse in Argentina and other places. The hashtag first gained global attention back in 2015, but since then, like many other activist hashtags, it was slowly replaced with something else, and the struggles facing women in Argentina have remained unchanged.

Yet it did not stop Micaela García from working to help galvanize the movement and revolutionize everyone around her. García volunteered in her community, was looked to as an inspiration by other activists, and was rising in the ranks of the Evita Movement, a left-wing political organization named after Argentina’s former first lady.

At home, García would sometimes “scold her mother for raising ‘machista’ sons” who did not have to contribute to household chores. According to her family, “she began working early on to ensure her independence, paying for school trips with her own savings, and convincing classmates not to drop out.”

That energy and dedication to social change was snuffed out when García was murdered by a man who should have never been released from jail. Sebastián Wagner was in jail previously for two rape charges, and despite continuing to be a violent offender in prison, his parole was granted last year by Judge Carlos Rossi.

Rossi argued that Wagner’s good behavior during monthly visits to his grandmother over the previous year and a half indicated that he was ready to walk free. Besides, the judge argued, parole “is a very important attenuating instrument for the super-high levels of violence and growing and alarming rates of overcrowding in prisons.”

As soon as Wagner was released, he began to target women again—first, the 12-year-old daughter of his then-girlfriend. He molested the young girl when she was changing and then began sending her threatening messages on Facebook. When the girl went to her adult sister for help, they took their evidence to the police, only to be turned away.

The family told BuzzFeed News that the police turned them away because their last names didn’t match with that of the girl, since she was adopted. They then went to the local juvenile court but the judge wasn’t there, and they were told to come back the following week.

During that time, having found a job, Wagner was free to continue to terrorize women. It was on the night of April 1 that he, along with his boss, went on a drunken and drug-filled hunt, in which they kidnapped, raped, and murdered García, dumping her on a muddy road.

The government has been largely incompetent when it comes to actually dealing with protecting and helping women who do come forward. Earlier this year, there was a huge blunder when they announced a plan to open three new safe houses for women fleeing domestic violence, but then sent reporters the exact locations of the shelters. Instead of owning up to that mistake when Women’s Rights Activists were rightfully enraged by this error, they simply released a similar statement, but redacted the address.

A poll compiled by a group associated with #NiUnaMenos revealed “that 97% of the women surveyed had experienced harassment either in public or at home and 67% had suffered physical abuse from their partner.”

What happened to García could have been avoided if Wagner had not been released from prison despite being a dangerous inmate, or if the police had given serious attention to the women who came forward when he molested a 12-year-old. Yet, the problem is ingrained into the daily lives of women in both macro and micro-aggressive ways.

Many women are forced to deal with these hyper-sexualized images and vile catcalling all throughout their daily lives with little ability to strike back, as highlighted by a campaign that put taunts heard by women on signage around Buenos Aires:

“You look like such a little whore, my love.”

“Mami, if I catch you, I’ll make you another son.”

“What if you suck my dick the way you’re licking that ice cream?”

The government has yet to see this issue as one serious enough to cause real change in spite of the statistics that to exist: “Of the men who killed women last year, only 9% were found guilty, 21% were at the trial phase, and 47% remained under investigation by the time the Supreme Court published its annual report in June.”

After six months, Wagner was found guilty and handed a life sentence on October 17. However, Néstor Pavón, his boss and accomplice, was charged with neither a rape nor homicide. He was sentenced to just five years for helping Wagner hide his crime.

Thankfully, there are people working to ensure that García’s legacy lives on. Despite this loss, her family and #NiUnaMenos is determined to continue working on her projects.

#VivasNosQueremos. We want us women alive.