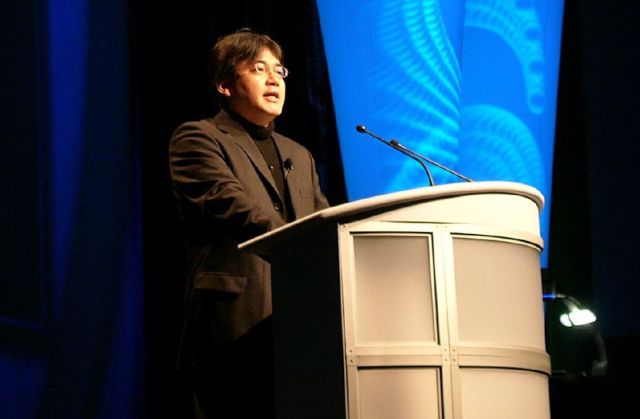 There have been a lot of rumblings about Nintendo in the press lately, but last night’s investor briefing finally brought everyone some rumblings from Nintendo, and they were pretty good rumblings. Nintendo laid out their plans for the coming year, and while they’re stuck with the Wii U for now, they’ve got a few solid ideas for how to turn things around.

A lot of information was dumped, and that includes Nintendo’s potential smartphone strategy, some kind of new fitness hardware and software, and their belief that dedicated game consoles are far from dead, but they also teased a way to reward gamers for buying Nintendo games.

On the Wii U and 3DS, Nintendo has made big steps into digital distribution and unifying their online business with Nintendo Network IDs (NNIDs), and that opens up alternatives to how games are priced in brick-and-mortar stores. Here’s what Nintendo President Satoru Iwata said about rewarding Nintendo’s gamers directly when it comes to price (emphasis added in all quotes):

For example, until now it has been taken for granted that software is offered to users at the same price regardless of how many titles they purchase in a year, be it one, five or even ten titles. Based on our account system, if we can offer flexible price points to consumers who meet certain conditions, we can create a situation where these consumers can enjoy our software at cheaper price points when they purchase more.

If we can achieve such a sales mechanism, we can expect to increase the number of players per title, and the players will play our games with more friends. This can help maintain the high usage ratio of a platform. When one platform maintains a high active use ratio, the software titles which run on it have a higher potential to be noticed by many, which leads to more people playing with more titles. When we see our overall consumers, they generally play two or three titles per year. We aim to establish a new sales mechanism that will be beneficial to both consumers and software creators by encouraging our consumers to play more titles and increasing a platform’s active use ratio without largely increasing our consumers’ expenditures.

Out of everything else Iwata discussed, this one has me the most excited. When I wrote about what Nintendo could do to get me to buy a Wii U, one of the things that I mentioned was cutting its price. However, being that I don’t work at Nintendo, I’m not sure how much farther they could cut the price and still make a reasonable profit.

A software price cut follows the spirit of what I wanted from a hardware price cut. If a few extra units sell due to a price cut, that should have at least a slight cascading effect as more consoles are in homes and more people see the system and, in turn, want one of their own. A price cut on software as a reward for purchasing other software should have a similar effect, because it will lead to more people playing more games and showing their friends, as Iwata said.

Also, it just sounds like a great idea. Club Nintendo has been around for a while, but the rewards you can get there for buying Nintendo games and redeeming points from them haven’t exactly been compelling. On the other hand, if buying Kid Icarus: Uprising on my 3DS led to other games being cheaper by something like $5-$10, I’d certainly be more likely to buy another game—especially if that made my next purchase cheaper, too.

He also talked about their recently teased smartphone strategy, and it turns out that, despite a statement earlier this week, (or perhaps because of the public reaction) mini-games on smartphones aren’t out of the question:

We will use a small, select team of developers to achieve it. Also, we recognize that attracting consumers’ attention among the myriads of mobile applications is not easy, and as I said before, we feel that simply releasing our games just as they are on smart devices would not provide the best entertainment for smart devices, so we are not going to take any approach of this nature. Having said that, however, in the current environment surrounding smart devices, we feel that we will not be able to gain the support of many consumers unless we are able to provide something truly valuable that is unique to Nintendo. Accordingly, I have not given any restrictions to the development team, even not ruling out the possibility of making games or using our game characters. However, if you report that we will release Mario on smart devices, it would be a completely misleading statement. It is our intention to release some application on smart devices this year that is capable of attracting consumer attention and communicating the value of our entertainment offerings, so I would encourage you to see how our approach yields results.

While he makes it very clear that we shouldn’t expect to get small games on smartphones, it’s certainly not out of the question, which is great. No, I don’t think Nintendo should shift its business to smartphones and other platforms. Iwata also reiterated that Nintendo doesn’t buy into the idea that dedicated game consoles are going to be destroyed by the smartphone market, which I completely agree with.

I also don’t think Nintendo needs to make games for smartphones as part of their smartphone strategy. In fact, I don’t think they should put demos or even console-style games on them at all. That just wouldn’t make much sense or even work right now, because both their portable and handheld use a bunch of buttons and two screens that smartphones just don’t have.

Still, I do think it would be a misstep if they only offered community based smartphone offerings like letting users connect to Miiverse, because they’re a game company. Some part of their smartphone offering should have an interactive, game-like aspect, and it looks like the team working on the initiative will have the freedom to do something interesting in that regard, which is nice.

It looks like they’re also addressing one of the other points I raised about the Wii U, which is that it doesn’t yet have a game that makes people say, “No other game platform has that, and I need it. I need it enough to buy a Wii U.” Of course, they’re stuck with the console they’ve got, so whatever game that winds up being has the tough job of proving that, in a world already saturated by the two-screened DS and 3DS, games can be made on the Wii U that offer experiences you can’t get anywhere else.

Still, Iwata said that Mario creator and all-around Nintendo heavyweight game designer Shigeru Miyamoto and his team will primarily focus on creating such a game this year, so it’s entirely possible that the Wii U will get a game that moves the console off of store shelves in a meaningful way.

In order to do this, it is obvious that Our top priority task this year is to offer software titles that are made possible because of the GamePad. We have managed to offer several of such software titles for occasions when many people gather in one place to play, but we have not been able to offer a decisive software title that enriches the user’s gameplay experience when playing alone with the GamePad. This will be one of the top priorities of Mr. Miyamoto’s software development department this year.

At the end of the day, even if Nintendo can’t turn the Wii U from a flop into a success, they’re going to be fine. This is not a make-or-break moment for the company, but I feel a lot better knowing that they have solid plans to address most of my personal concerns with the Wii U’s performance. Keep it up, guys. I’m looking forward to seeing this system-selling game.

(If you’re so inclined, you can read the entire, incredibly lengthy briefing from Mr. Iwata right here.)

(via Kotaku, image via Jon Jordan)