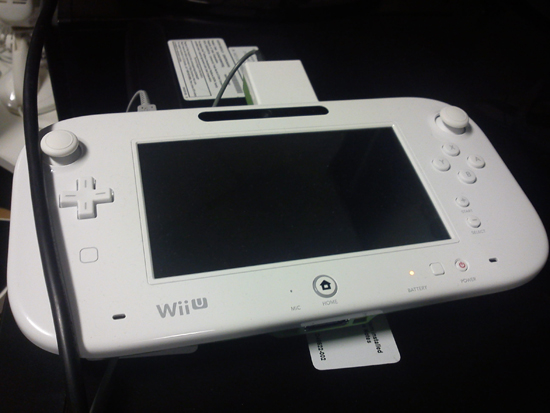 And so, it was that the latest redesign for Nintendo’s Wii U tablet comes courtesy of Twitter user MATTYB00SH — who no longer exists; likely as an attempt to escape pointing fingers — via a picture they snapped in the QA department of TT Games. Given that the redesign seems pretty different from what we’d previously seen, ditching the handle was probably a good idea. The games industry hasn’t historically been kind to those that leak major console news.

Obviously, nothing is confirmed until Uncle Nintendo gives the thumbs up but the branding seems pretty conclusive. That doesn’t mean that this all couldn’t be an elaborate fake. It just so happens that the changes made seem to be par for the course and make sense from a design perspective.

What used to be mere nubs like on the Nintendo 3DS appear to have been replaced by genuine analog sticks which sit in circular impressions rather than the typical octagonal shapes of the Wii controller. The branding has been moved slightly with the plus and minus buttons shifted over to the right side of the tablet. The function of the two button-like shapes off to the left below the analog stick and between the power button and battery life is still entirely up for speculation.

Nothing is final about this, clearly. Even if Nintendo does confirm this is a current redesign, things might change from now to launch. They might even add a third nondescript square button.

(via Joystiq, image credit via MATTYB00sH (who is gone))