Nintendo Stomps on No Mario’s Sky, Creators Revive It as DMCA’s Sky 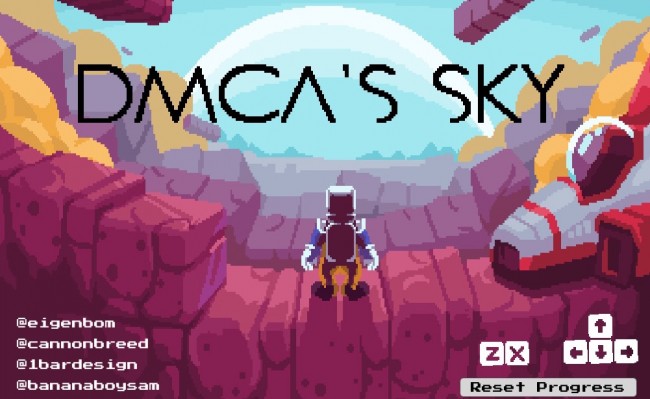 Nintendo does not take too kindly to fan works that use their copyrighted material, so it’s no surprise that they moved quickly to shut down procedurally-generated Mario/No Man’s Sky “parody” No Mario’s Sky. Luckily, the creators had anticipated that might happened, and the game has already popped back up with a new title that parodies Nintendo’s approach to overzealous fans: DMCA’s Sky.

As usual, copyright law is a complicated matter left up to a judgment call, but when it comes to DMCA takedown notices, it’s generally large businesses that have all the leverage, since challenging them could easily wind up being astronomically more costly than just taking a fan game offline. That may be a bit unfair, but as Max Cahill, one of the-game-formerly-known-as-No Mario’s Sky’s developers, put it on Reddit, “It’s definitely Nintendo’s right to defend their IP. They’ve worked hard on cultivating an air of quality and Mario is at the heart of that. We respect their wishes and as they don’t want folks playing it, we’ve taken it down.”

It’s also hard to see how the game could be defended on the grounds of parody, which is allowed under copyright law. (Weird Al Yankovic famously gets permission to use the songs he parodies despite the fact that he doesn’t legally have to.) Whether or not some aspects of the game are jokes, it’s also a fully-playable Mario clone with the gimmick that its worlds are procedurally generated. On the other hand, it’s not likely that the game ever posed a real threat to Nintendo, and their approach in the takedown (and that of other fan works recently) is certainly a bit “heavy handed” as Cahill later put it.

DMCA’s Sky is still a fun concept and an impressive game considering it was made in just a few days for a game jam. The Mario flavor (seen in full in gameplay videos) is also still unmistakable despite the changes made to appease Nintendo, and you can surely find a way to download the original somewhere on the Internet—another reason Nintendo’s decision seems like a bit of a waste.