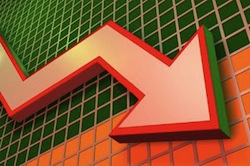 Following Nintendo’s 3DS announcement yesterday, their stock dropped 9.34%, probably in part due to missing the holiday launch window and in part due to carrying a hefty price tag that is $100 more expensive than their own current-gen console.

The 3DS was delayed until February in Japan, causing Nintendo to change its fiscal year profits forecast from $2.4 billion down to $1.08 billion. In a statement by Nintendo:

“The earnings forecast has been modified to reflect the trend of stronger-than-expected yen appreciation, current sales performance, the sales outlook for the holiday season and the decided release conditions for the Nintendo 3DS.”

The drop in stock doesn’t quite come as a surprise, considering the unprecedented price tag, the final specs of the device ending up well below the rumors, and the handheld’s most anticipated titles being 3D ports of games from past generations. However, it’s a Nintendo handheld, and those generally tend to take all our money.